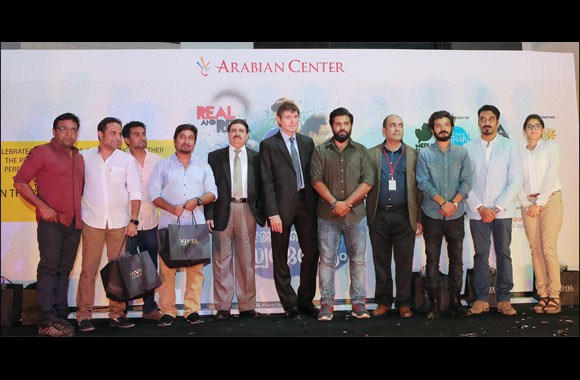 Moment of Memoir: Reel and Real Life Cast and Crew of Jacobinte Swargarajyam (Jacob’s Kingdom of Heaven) at Arabian Center on Thursday, May 12th 2016.

Dubai, UAE, May 14, 2016:   Celebrating the success of an emotional journey and applauding the fortitude of Dubai based businessman who emerged as a fighter through difficult times, Arabian Center brought together the Reel and Real life family of Jacobinte Swargarajyam (Jacob’s Kingdom of Heaven) last Thursday.

The event was graced by Malayalam actor Nivin Pauly, along with the film’s crew, including its director Vineeth Sreenivasan and actors Renji Panicker, Sreenath Bhasi, Ashwin Kumar and Aima Rosmy Sebastian. The event also witnessed the presence of the NRI businessman’s family settled in Dubai who is the lead inspiration for the film.

Mr. Tim Jones, COO, Arabian Center and Lamcy Plaza commented, “Hosting such a wide spectrum of Reel and Real stars is really a great honour. The positivism that ebbs from the movie is phenomenal and having the stars along with the real-life inspiration is certainly a moment to cherish. At Arabian Center, we’ve always aimed at providing our visitors with a great shopping and entertainment experience. However, this initiative is an effort to remind each of us that optimism and endurance can help us sail through turbulent storms.”

Inspired by the real life story of a Dubai based businessman, Jacobinte Swargarajyam is one of those many survival stories that we have been through. It is indeed a redeeming tribute to an individual who had simply refused to be bogged down by the tremendous hardships that life had decided to put him through!