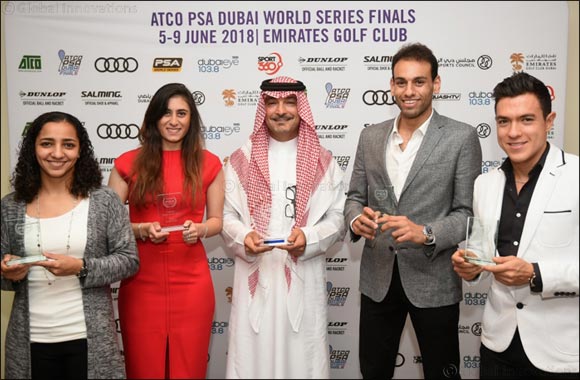 Dubai, UAE, June 5, 2018:  Egyptian World No.1s Mohamed ElShorbagy and Nour El Sherbini were the big winners at the 2017/18 PSA Awards as they collected the Player of Year Awards in recognition of their exploits over the past season on the PSA World Tour during a gala dinner held at the Westin Dubai Mina Seyahi Beach Resort & Marina last night.

On the eve of the season-ending ATCO PSA Dubai World Series Finals, ElShorbagy, who begins the defence of his title today (June 5) against Colombian Miguel Angel Rodriguez, was presented with the men's trophy following an emphatic return to the top of the game that saw him win seven major titles, including the 2017 PSA World Championships crown, during the campaign.

ElShorbagy narrowly edged Rodriguez – the man who beat him in the final of the recent Allam British Open – to the accolade which was chosen by the PSA Awards Committee, a group consisting of selected influential former players, members of the media, tournament promoters and PSA Board representatives combined with the results of a social media vote.

El Sherbini meanwhile was honoured with the women’s award after a season that saw her claim four PSA World Series titles - the Hong Kong Open, inaugural Saudi PSA Women’s Squash Masters, Tournament of Champions and British Open - as one of only two players, alongside compatriot Nour El Tayeb, to collect multiple World Series title this season.

New Zealand’s Joelle King, who returned to the top of the women’s game four years after a career-threatening injury, was runner-up.

Egyptian Women’s World Champion Raneem El Welily collected the Female Spirit of Squash Award. Chosen by her fellow players, the prize goes to the player who best demonstrated sportsmanship throughout the season both on and off court - while Rodriguez collected the men’s award.
Rodriguez also picked up the Men’s Shot of the Season Award, with El Tayeb taking the women’s award. El Tayeb was also one half of the Women’s Match of the Season combination alongside King - with fans voting for their epic title decider at the Windy City Open.

The Men’s Match of the Season was German Raphael Kandra’s win over Marwan ElShorbagy in their epic British Open quarter-final encounter.

The final prize of the evening went to PSA Chairman Ziad Al-Turki, who was presented with the PSA Services to Squash Award by the PSA Foundation in recognition of his contribution to the sport during the past twelve months.

Spend Time in Nature with Budget-friendly Activities with QiDZ

2020 Brings Choice for In-Building Wireless in the Middle East

Samsung Pay Expands in the UAE with New Bank Partnerships

New sales record: BMW M GmbH most successful manufacturer in its segment for the ...

Dalma Mall Induces Nostalgic Moments for a Gathering of Over 15000 Fans With Ara ...

Etisalat remains the most valuable consumer brand in MEA for the 3rd consecutive ...

DEWA to highlight future possibilities for women in the sustainable energy secto ...

Regus foresees the top trends of 2020 in the flexible workspace industry in the ...