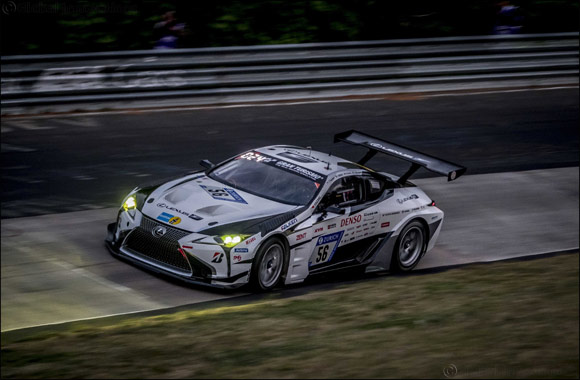 Share Home >> Entertainment
Lexus LC claims a class win on its debut in the German endurance race
Dubai, UAE, June 6, 2018:  Overcoming the challenges of one of the world’s most demanding circuits, the No. 56 GAZOO Racing’s Lexus LC, driven by Takeshi Tsuchiya, Takamitsu Matsui, Naoya Gamo, and Yuichi Nakayama, made a remarkable debut race and claimed the first position in the SP-PRO class of the 24 Hours of Nürburgring endurance race recently in Germany.
The No. 56 GAZOO Racing’s Lexus LC demonstrated its out-and-out pace in qualifying, lining up 32nd on the starting grid in a field of 147 cars with a best lap time of eight minutes and 34.591 seconds around the climbs and descents of the 25-kilometer German racetrack.
Shigeki Tomoyama, President, GAZOO Racing Company, said: “Although GAZOO Racing’s Lexus LC was forced to pit-in many times unexpectedly due to the impact at the beginning of the race, we are delighted to complete the 24 hours and the whole race. The drivers, mechanics, engineers, and support staff all carried out their roles, and we made every effort to race the car without giving up until the very end. We would like to express our sincerest gratitude to all of our suppliers and partner companies who have helped to sustain these activities.”
Tomoyama stated that the knowledge and technologies refined here at the Nürburgring circuit will not only be incorporated into models in the GAZOO Racing brand line-up but also utilized in a variety of future production cars.
Commenting on the win, Yugo Miyamoto, Chief Representative of Middle East & North Africa Representative Office, Toyota Motor Corporation, said: “The 24 Hours Nürburgring endurance race proved to be an excellent experience, testing the team’s strengths and vehicle’s capabilities, while also showcasing the best of Lexus. Despite a challenging debut race, the Lexus LC dazzled the audiences with its winning performance, adding to our achievements and capabilities in motorsports.”
Miyamoto added: “We remain dedicated to continuously building on the experience gained on racetracks all over the world to not only engineer amazing vehicles but also capture our customers’ hearts and minds and ignite their emotions. We would like to thank our fans and customers for their continuous support and for being an inspiring force behind our continued success.”
The main race started with a total of 147 vehicles on the tarmac with Takamitsu Matsui at the wheel of the Lexus LC. Immediately after the start of the race, the No. 56 GAZOO Racing’s Lexus LC suffered impact damage. However, it was able to continue, with repairs being made during the first scheduled routine pit stop as it did not need an emergency pit-in.
Technical issues that the team had not encountered in testing emerged even after that, but were all successfully addressed, with the drivers, mechanics, and engineers corresponding quickly and surely, returning the car to the course once more.
The No. 56 Lexus LC continued the race from 6:30 in the morning without any significant issues and managed to increase its position in the race ranking. When the checkered flag was finally waved, the No. 56 Lexus LC took first place in the SP-PRO class and finished 96th overall.
Race Notes: