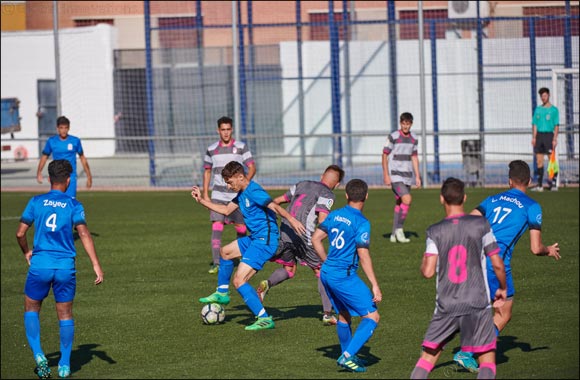 Share Home >> Entertainment
Dubai, UAE, August 18, 2018:  The du LaLiga HPC U14 and U16 teams have had a winning week in Spain, beating two major LaLiga Youth Club Teams.  The du LaLiga HPC U14 team, who have embarked on their first scouting camp in Spain this year, delivered a stellar performance in their match against Cadiz, snatching a well-deserved victory with a fierce defense in a highly competitive match played on the Spanish club’s home ground.
UAE Champions du LaLiga HPC U16 squad, still on a high from winning the UAE FAAL and TTD Super Cup in Dubai, crushed Granada in a superb match, breaking through Granada CF’s defense in the second half to finish the match with a 4-0 at the final whistle under the watchful eye of LaLiga scouts on the lookout for exceptional talent.
The U14 team kicked off their first match against Cadiz with confidence, playing a strategic game of great pace and quick, controlled passing holding off the home side to a 0 – 0 half-time score.  They came back onto the pitch hungry for a win to set the tone of the trip and played a high-energy second half. A tackle on Yiannis Petras landed them a free-kick 20 minutes into the second half, which Yiannis wasted no time to hook into the badk of the netovera four-man Cadiz wall. The boys held on to the lead to the closing whistle to take their win 1-0.
In Granada, the du LaLiga HPC U16 squad faced tough opponents and first half saw them blocked by the home team, Granada CF, unable to find a break, ending the first half at 0-0.  Fifteen minutes into the second half Mohammad Shabrawy capitalized on an error from the Granada CF defender and found their first window to plant a solid ball over the keeper and into the back of the net. Within 3 minutes the boys were awarded a free kick taken by Elliot Clark who found Fabio Rollano at the edge of the box whose powerful left foot volley found the top corner.  Moments later Barbod Mazloumian’s assist to Mohammed Shabrawy led to goal number 3 and a final attack on goal moments before the final whistle was taken by Barbod Mazloumian taking the match to a 4-0 win.
While this week was the final one for the U14 team in Spain for the 2017-2018 season, whereupon they will return to the UAE, the du LaLiga HPC U16 & U18 teams have another 3 matches in the coming week where they will meet UD Almeria, Real Betis and Malaga FC.
Commenting on the results following the first week, Fernando Sanz, General Director - LaLiga, MENA said, “We are very proud of our HPC teams and their performance this week. The level of football in LaLiga is very high and the fact that these young men have the level to compete and win at Spanish standards reflects on our professional development program we have for in place for them in the UAE delivered by the finest LaLiga coaches.  The LaLiga youth clubs now look forward to these summer matches and are giving us very positive on some of our top players. And this year, we are delighted that the U14 team is joining the LaLiga scouting camp for the first time, and they are already making their mark!”
The third annual du LaLiga HPC trip is witnessing the largest team of athletes to date with 48 players, ranging in age from 11 to 17 years and representing the top players selected from across the UAE through the duFC platform.
The du LaLiga HPC was set up in the UAE 3 years ago to provide top footballers across the nation with a clear pathway to a pro-football career, by providing them with the highest level of training delivered at LaLiga standards.
The du Football Champions, in partnership with LaLiga, has created the only international scouting platform to enable youth from across the UAE to pursue international football careers.  Scouted talents are invited to join the du LaLiga High Performance Centre at which they are trained by LaLiga coaches yearlong in preparation for professional football careers nationally and internationally.  Through the scouting camp in Spain they can earn trials at LaLiga clubs which may lead to contract awards.