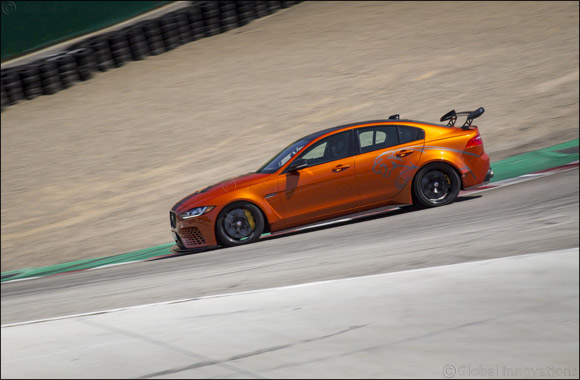 “Designed, engineered and hand-assembled by Special Vehicle Operations, this record-breaking sedan is made for the world’s most demanding driving enthusiasts.”

Project 8 is the ultimate expression of Jaguar’s XE sports sedan. While based on XE’s lightweight aluminium-intensive monocoque, each of the 300 hand-built Project 8 cars are modified at the SV Technical Centre in Coventry to accommodate the specially tuned, supercharged 5.0-litre V8 engine and a bespoke rear differential.

The front and rear fenders are bespoke to accommodate larger, wider, wheels which are necessitated by the larger brakes. The V8’s power is routed through all four Michelin Pilot Sport Cup 2 tyres through an eight-speed Quickshift automatic ZF transmission, helping to propel the car from 0-60 mph in 3.3sec and an electronically limited top speed of 200mph.

In order to achieve this performance, the car receives significant aerodynamic and suspension upgrades, including a ‘Track’ mode for maximum downforce and further improvements to the damping, throttle and steering response.


Pandora ME for Every Side of You