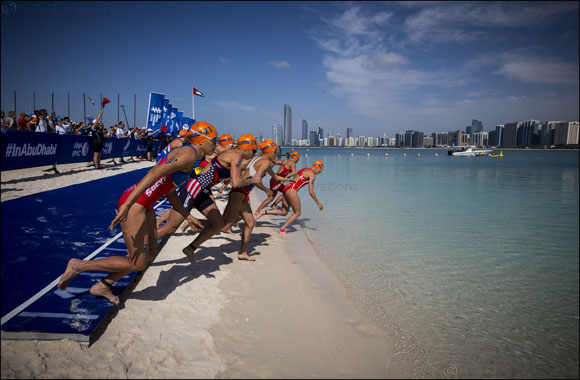 Share Home >> Entertainment
- H.E. Mohammed Khalfan Al Rumaithi, Chairman of the General Authority for Sports and Deputy Chairman of the Abu Dhabi Sports Council: “Abu Dhabi will stage the most memorable 2022 ITU Grand Final”
- Abu Dhabi will welcome over 7,500 triathletes from all over the world for five days
Abu Dhabi, UAE, 16 September, 2018: H.E. Mohammed Khalfan Al Rumaithi, Chairman of the General Authority for Sports and Deputy Chairman of the Abu Dhabi Sports Council has hailed the country’s successful bid to host 2022 ITU Grand Final. Commenting on the news of the successful bid, he said:
“We are thankful for the sport’s governing body and the participating nations for the faith they have shown to stage the 2022 ITU Grand Final in Abu Dhabi.
“On our part, we will leave no stones unturned to make this event a most memorable one for the athletes and the fans, which has always been our intentions as one of the leading venues in the world for international sporting events.
“We will be hosting the fifth edition of the ITU World Triathlon in March and the success of the previous staging of this event has been one of the reasons for us to be successful in the bid to host the Grand Final.
“Needless to say Abu Dhabi is established offering world class sporting facilities and hosting world class events. But we are very happy to add another to this growing list of World class events.
“Triathlon is a sport we want to promote among the country’s youth and staging the Grand Final will definitely help.
“We want to create an awareness of the sport and encourage our youth as well as to encourage participation from all communities in the country.”
Abu Dhabi successful in their bid to host 2022 ITU Grand Final
Abu Dhabi has been awarded the 2022 ITU World Triathlon Grand Final, following an announcement by the International Triathlon Union (ITU) Executive Board at its annual Congress in Australia.
It is expected that the Grand Final will welcome more than 5,000 international triathletes as well as some 2,500 local triathletes over a five-day triathlon festival.
The Grand Final is the pinnacle of the global triathlon season, with World Champions being named across both elite and amateur categories as a result.
With the ITU World Triathlon season-opening race already a firm fixture in the regular sporting calendar, the winning bid for the Grand Final further bolsters Abu Dhabi’s global status in the triathlon world.
Commenting on the decision to award the 2022 Grand Final to Abu Dhabi, HE Aref Al Awani, General Secretary of Abu Dhabi Sports Council said:
“I congratulate the leadership for this winning bid for the 2022 ITU Grand Final. This decision clearly demonstrates how Abu Dhabi Sports Council continues to align with the emirate’s vision to develop and host the very best sporting activities.
“Our world-class facilities and other headline events such as the world famous Formula 1 Grand Prix and the award-winning Abu Dhabi HSBC Championship provide us with great opportunities to promote sport more widely in the UAE and showcase Abu Dhabi to the watching world.
“Hosting the Grand Final for the very first time will continue that legacy and we will be able to showcase the achievements of the many world-class athletes set to participate, as well as inspiring future generations to get involved.”
From 2010 to 2014, Abu Dhabi hosted five editions of Abu Dhabi International Triathlon – an all-inclusive race, welcoming an impressive range of elite, amateur and junior triathletes.
In 2014, as agreement was signed between the ITU, Abu Dhabi Sports Council and WORLDSPORT Arabia, resulting in the season-opening race of the ITU World Triathlon being held annually in the UAE’s capital. The inaugural ITU World Triathlon Abu Dhabi took place in March 2015 on Abu Dhabi’s corniche.
H.E. Al Awani added: “When the prestigious launch of the ITU’s World Triathlon Series calendar became available for the first time in 2014, Abu Dhabi recognised a unique opportunity to host the first and only ITU World Triathlon Series event in the Middle East.
“This was an opportunity to recognise and respond to the huge potential for growth of the sport regionally — and it was one that could not be missed.”
The 2018 event marked the fourth edition, following its move to Yas Island in 2017. The race circuit will take centre stage once again on 8 – 9 March 2019, as Abu Dhabi hosts the ITU World Triathlon for the fifth consecutive year.
Amateur participation in the event has seen impressive growth, from 1,600 in 2015, to 2,500 in 2018 — an increase of 56% — making the 2018 World Triathlon Abu Dhabi the largest triathlon in the region in terms of participation.
As well as participation numbers, the event has also become the most inclusive triathlon in the region, with dedicated races introduced for para triathletes and Special Olympic triathletes.
Gary Marescia, Event Director of the ITU World Triathlon Abu Dhabi said: “The ITU World Triathlon Abu Dhabi has gone from strength to strength.
“We are pleased to be able to provide something for everyone, whether beginners, seasoned amateurs, para-triathletes or professionals.
“Staging the ITU Grand Final will be a huge undertaking with Abu Dhabi playing host to so many athletes - this year’s successful bid highlights Abu Dhabi’s huge ambition to be a part of the very best sporting events.
“It’s fantastic news, and entirely fitting, that the emirate has been chosen to host such a world-class event.”
As a Grand Final host city, Abu Dhabi will also stage the ITU's annual Congress in 2022, which takes place in the days leading up to the race.