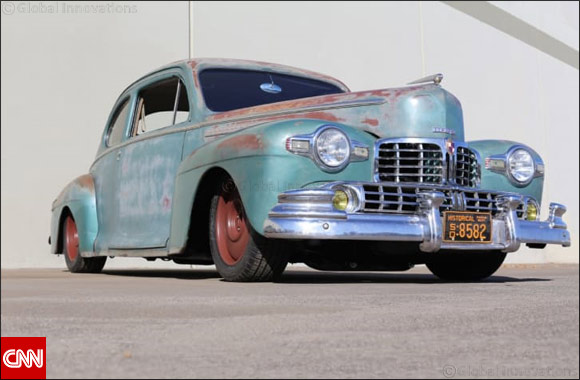 The vintage cars with a high-tech secret

Dubai, UAE, September 23, 2018:   While most vintage car enthusiasts seek to return vehicles to their former glory, Jonathan Ward prizes and preserves the beauty in their decay, while hiding some high tech secrets under the hood.

Ward is the founder of ICON, a California-based company that reimagines classic SUVs like Toyota FJs and Ford Broncos with modern tech and materials.

While that remains the bulk of the business, Ward has another, more unusual passion project: take vintage cars and, instead of restoring it to the way that it would have looked and driven when it was created, preserve the decay that has occurred through the years but update the vehicle to a cutting-edge driving experience. It's a project he calls 'Derelict.'

'The whole idea of the Derelict series is that we do a lot of work to make it look like we did no work. We want to capture the beauty that is only possible through time earned patina. So that natural decay and all the coloration, because every scuff, every dent tells a story,' he said.

Each commission is completely one-of-a-kind, and Apple's Jonathan Ive is reputed to be among the clients. Once concept is settled, then begins the process of finding these very specific models.

'Once we get the green light, I put out an APB to a network of hunters that work for us that help us track down these vehicles. It could be everything from a simple online ad through to package delivery service employees that we work with because they're in everyone's garage or even a couple of firemen so they kind of know what's hiding here and there, and then we pay a finder's fee to them we bring the vehicle here.'

This process takes anywhere from 72 hours to two years, and there have even been times where the search had to be abandoned.

To achieve the results Ward so meticulously desires, his technicians and engineers have to employ some pretty unique processes. On the shop floor you'll see everything from aerospace machinery used in the early 1900s for the military, up to the latest in laser technology.

The result looks like it could have been found in a barn (which it probably was), but on closer inspection every element has been carefully designed and selected to achieve both a uniform aesthetic but also the complete modern driving experience. Imagine a rusty, vintage Thriftmaster pickup truck that drives as fast as a sportscar.

It's a somewhat radical concept in the luxury car industry. 'A lot of people look at the Derelict projects and go, 'Why on earth would anyone spend all that time and money on something that looks, pretty bad?' So not everyone gets it,' Ward mused.

Each year, Icon delivers about 250 vehicles, but the Derelicts are the most rarefied. They only produce around three or four a year so, in total, they have delivered just under two dozen.

'The business model of building the Derelicts is pretty darn stupid. At the end of the year we're lucky to break even on them,' he admitted.

'We are constantly riding the knife's edge on a design and engineering perspective. Trying to make sure we don't do anything that negates the on road capability while balancing decisions that could hurt the design aesthetic. That is the art form of what we're doing.'


MoHAP Launches the AI-Based First of its Kind Device for Treatment of Diabetic F ...

SEHA TO SHOWCASE ITS SOLUTIONS FOR THE MENA REGION'S BIGGEST HEALTHCARE CHALLENG ...