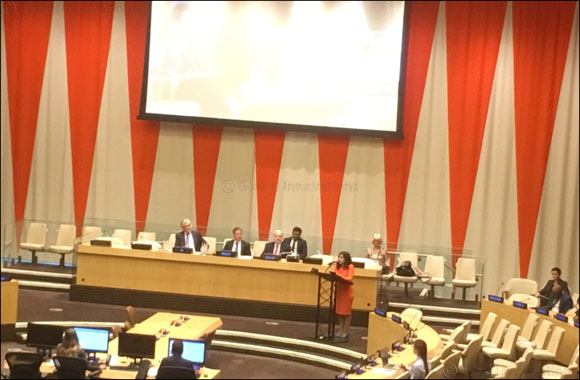 Dubai, UAE, October 02, 2018:  18 year old environmental activist and youth leader Kehkashan Basu was selected by the President of the UN General Assembly to address the September 26 United Nations High Level Meeting on Nuclear Disarmament as one of the two representatives of global civil society. She is Youth Ambassador of the World Future Council and the Founder President of youth sustainability organisation , Green Hope Foundation.

The High Level Meeting on September 26 involved Presidents, Prime Ministers, Foreign Ministers and UN ambassadors presenting either their hopes and aspirations for nuclear disarmament, or their excuses for keeping the nuclear arms race going. It falls on the anniversary of the incident in 1983 when a nuclear war was almost fought by accident. In 2013 the UN General Assembly decided to hold a series of annual High Level Meetings every year on September 26 at which governments could express their views and proposals

During her passionate address to the assembled delegates from 193 countries , Kehkashan said ' In 2015 the world’s nations adopted the sustainable development goals with concrete programs on reducing poverty and protecting the environment. Yet governments continue to undermine progress by investing more in military, including nuclear weapons, than in achieving the goals.

I recognise that for many countries, nuclear weapons provide a sense of security. Perhaps they play a role in preventing war. But we are a civilised and intelligent society are we not? We know how to resolve conflicts, prevent aggression and enforce the law without having to threaten to destroy civilisation. We have the United Nations, the OSCE, the International Court of Justice and many other mechanisms for diplomacy, common security and law. So even if we can’t prohibit and eliminate nuclear weapons overnight, we can start the disarmament process, slash the nuclear weapons budgets and start funding peace.'

Delegate after delegate called upon The United Nations and its member countries to focus more on disarmament for sustainable development. The nuclear arms race, in particular, should be halted and the $100 billion global nuclear weapons budget be redirected towards ending poverty, reversing climate change, protecting the oceans, building a sustainable economy and providing basic education and health care for all of humanity. Instead, the nuclear armed States are squandering resources and keeping their nuclear weapons poised to strike. One mistake would cause a humanitarian disaster, robbing children and youth of their health and future, and maybe even ending civilization as we know it.

Peace is therefore fundamental to progress and sustainability and all nations , civil society and stakeholders should work together to discard weapons of mass destruction and instead use their resources for addressing the challenges of poverty, hunger , disease , education that are confronting humanity.