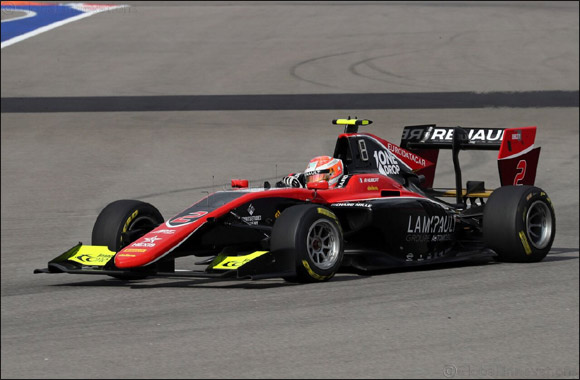 While Lewis Hamilton, Sebastien Vettel and the household names battle it out in the main event, the weekend will also see a new crop of young guns try to out-perform each other at one of the world’s most iconic Circuits.

This year both the F2 and GP3 Championships look set to be decided on the final day of the season at Yas Marina Circuit.
The F2 and GP3 Series offer the top young drivers a route to the very pinnacle of global motorsports: Formula 1.

One racer who successfully made the leap from F2 to F1 is young French sensation Charles Leclerc, who now drives for Alfa Romeo-Sauber.
Leclerc won last year’s F2 championship at Abu Dhabi in dramatic fashion. He finished the second leg of the final race of the season out of the points but a collision involving his nearest rival in the drivers’ standings meant Leclerc ended up taking the crown and with it the chance to race in F1.

Pierre Gasly also took the same giant step up last year, although his route to F1 was a little more complicated. Having tasted victory at Yas Marina Circuit during the 2016 F2 season his F1 dream was hampered due to the fact he didn’t have a team.

However, after spending half of last season excelling in the Super Formula Championship, Gasly was offered an F1 drive with Torro Rosso and has been performing well ever since.

A highlight of this year’s F2 season has been the emergence of ART’s British racer George Russell.

No stranger to die-hard motorsports fans, Russell won the GP3 title last season, ensuring his step up to F2. Already leading this year’s drivers’ championship and looking on course to take the crown, Russell has been assured of an F1 seat in 2019 with Renault.

However, the talented driver is eager to go out in style which means spectators can expect see Russell put on an impressive show as he aims to wrap up his victory in Abu Dhabi.

Set to join Russell in F1 next year is fellow Brit, Lando Norris who drives for United Autosports. The youngster has been picked to replace F1 legend Fernando Alonso at McLaren Honda despite only making his debut in F2 this season.

Norris caught the eye after a string of impressive results at the start of the season, and although his form has dipped of late he is still third in the championship.

His skills behind the wheel at the start of the series were enough to impress the bosses at McLaren Honda who see Norris as the next big thing in F1.
Although Russell is on course to win the F2 crown, Alexander Albon is currently in second place on the leaderboard and is, mathematically at least, still in with a shot of taking the top honours.

As unlikely as this may be given Russell’s form on the track, it should make for an exciting last race of the F2 season at Yas Marina Circuit.

This year’s F2 series has featured a new-look car with a new and improved turbo that gives the young drivers the chance to experience the next best thing to a high-tech and super-powerful F1 racer.

And with all the teams using the same car, F2 is the one of the best ways to see the pure, raw talent of a new generation of drivers in action on a level playing field.

In GP3 this year the highlight has been the continued domination of the ART team, with the championship coming down to a fight between its four drivers on the last day of the season at Yas Marina Circuit.

With ART proving themselves to be the strongest team once again, this doesn’t mean the championship has lost any of its spark. All four drivers are in with a chance of claiming the crown at the Circuit along with the all-important team bragging rights.

While F2 and GP3 might be lower down motorsport’s pecking order compared to F1, they certainly aren’t poor relations.

With the rules governing both F2 and GP3 stating that all of the cars must have the same chassis, engine, gearbox and tyres, the on-track duels have to be decided by the skills, quick thinking and talents of the young men behind the wheel.

Another reason why the F2 and GP3 series are so exciting is the ‘reverse grid’ policy. With two races placed at every track, the winner of the first race is forced to start the second from the very back of the grid.

With all of the drivers lined up in the reverse order to their finish in the first race, this means everyone is in with a shout of making the points with driving skills, not just speed, being key.

Over the years, drivers in both categories have acquitted themselves well at Yas Marina Circuit, which is one of the more technical tracks on the F1® racing calendar.

The Circuit’s ‘street section’ in the last sector (turns 17-18-19) and its slower corners, sequences and off-camber corners means it is easy for drivers of all abilities to slip up and make a crucial mistake.

While the F2 and GP3 championships will help get spectators in the mood for a weekend of motorsports action, they also give budding young drivers from the region a valuable look at the skills needed to reach their dreams of F1® stardom.

67 Minutes Will Never Be Enough Empathy

IFS Named a Leader in the Gartner 2020 Magic Quadrant for Field Service Manageme ...

New York's Favorite Burger is Shakin' it up in Deira Dubai

Etihad Airways to Resume Special Passenger Services to and From Abu Dhabi to Six ...

Travellers Should ‘Wear to Care' in the New Normal says WTTC