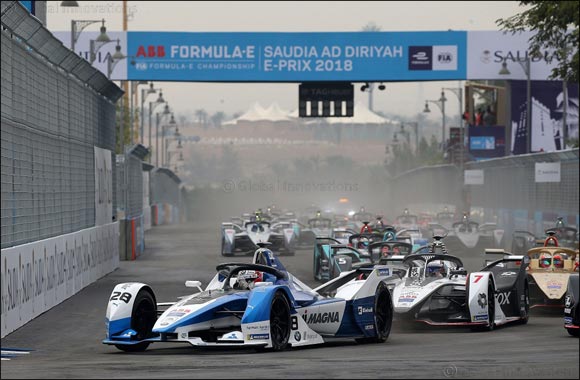 It was Félix da Costa’s second win in his Formula E career. Alexander Sims (GBR) was involved in plenty of duels in his maiden race in the race series for fully electric single-seater cars and crossed the finish line in 18th place after two penalties for breaching technical regulations.

After rain showers in the morning, the 22 drivers in the field only had one practice session available before it was on to qualifying. Numerous delays meant that the drivers started in two instead of the usual four groups. Félix da Costa achieved his pole time in the very first qualifying group. The race was held in dry conditions. The newly introduced “ATTACK MODE” and the “FANBOOST” provided additional excitement. Félix da Costa was one of five drivers who was able to use this additional boost of energy in the closing stage of the race. The BMW i8 Coupé Safety Car was in action during the season opener.

The ABB FIA Formula E Championship enters its second round in Marrakech (MAR) on 12th January 2019.

Reactions to the Ad Diriyah E-Prix:
Jens Marquardt (BMW Motorsport Director): “First race for our BMW i drivetrain, first pole position, first win – it’s just incredible! Big thanks go to the entire development team of BMW i and BMW Motorsport in Munich. Together you did an incredible job! And of course, congratulations to António and everyone in the BMW i Andretti Motorsport team. I’m very proud of the whole team. There’s no better way to end the 2018 motorsport year, and you would be hard pushed to have a better start to a new project and a new season.”

Roger Griffiths (Team Principal BMW i Andretti Motorsport): “It’s impossible to put into words the emotions in this moment. This race was our first opportunity to show what we as the BMW i Andretti Motorsport team can achieve – and we won at the first time of asking. It’s incredible. Without the support and the technology of BMW, this success would never have been possible. The victory belongs to the whole team.”

António Félix da Costa (#28 BMW iFE.18, qualifying result: 1st place, race result: 1st place, FANBOOST voting: 3rd place, points: 28): “That’s a great day for me, BMW and the whole team. Thank you to everybody! I’m delighted – for me, that I’m back at the top of the podium again after such a long time, but primarily for the team. We have always had the same goal, to get to this point. And each of us gave it our all. Days like this make it clear: It’s worth all the effort! Many thanks to everyone who played their part in this win. But we still have a lot of work to do. Jean-Eric Vergne was incredibly fast, it was really close at the end, my heart rate went through the roof. But in the end, I did enough.”

Alexander Sims (#27 BMW iFE.18, qualifying result: 17th place, race result: 18th place, FANBOOST voting: 13th place, points: 0): “My first Formula E weekend was a big challenge and I learned a great deal. António did a fantastic job with pole position and the win, and showed how fast our car is. After a difficult qualifying session, I was actually doing quite well in the race in eighth place, but then two penalties unfortunately pushed me right down the field. Despite this, the weekend has made me optimistic for the upcoming races.”