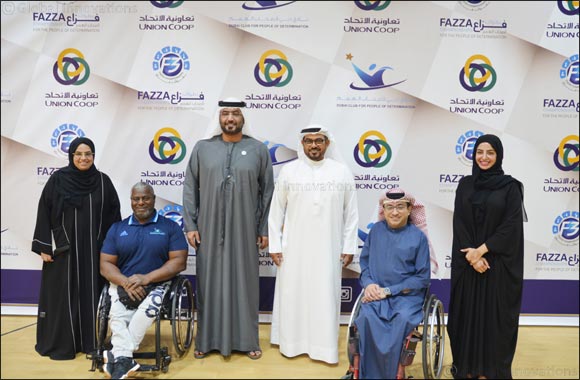 Mr. Thani Juma Berregad expressed his appreciation on Union Coop’s participation in this event and pointed out that Union Coop had previously contributed to the initiative in form of a large Umbrella Shade that facilitated girls to exercise at the Dubai Club for People of Determination, in addition to providing other products for the staff of the club.

“We are delighted to have a distinguished and a long-term partner in Union Coop, which is one of the primary entities that have a clear impact on the economy and came forward to be the elite sponsors, and we thank them for that, we wish them good luck as well,” said Mr. Thani Juma Berregad.

Mr. Majed Abdullah Alosaimi praised Union Coop and its role in serving the community by participating in events that serve the community members from all walks of life.

He said: 'On this occasion, the strategic and community objectives of FAZZA Championships meet with the objectives of Union Coop. The association’s sponsorship of 6 international FAZZA tournaments will begin on February 5, when FAZZA international Power Lifting begins. With our sincere thanks.”

Dr. Suhail Al Bastaki said, “Taking care of people of determination is one of the primary objectives of Union Coop, which is in line with the wise leadership’s vision of making Dubai a friendly and happy city by the year 2020. Initiatives like these contribute to the integration of people of determination with the community and these will not only be about slogans, as everyone sees success in various sectors in the Emirate of Dubai. Since Union Coop’s founding in the year 1984, serving the community has been the primary goal.”

The Paralympic Champion Mohammed Khamis Khalaf said, “The involvement of Union Coop as the sponsor of FAZZA Championships for the People of Determination is one of the best motivational moments for us and it will help in improving our efforts and responsibility to achieve much more for our Nation.”