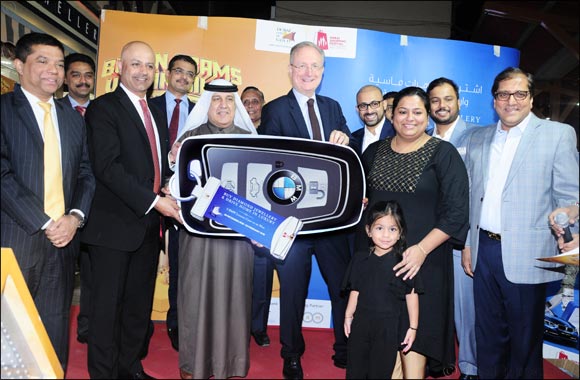 Share Home >> Lifestyle
Dubai; January 20, 2019:   Dubai Gold & Jewellery Group’s (DGJG) ongoing promotions for gold and diamond jewellery is acting as a major catalyst to increase the shopper participation for the running Dubai Shopping Festival. With over thousands of participants in the first 24 days of the promotion, the group has received a magnificent response from both residents and tourists alike. Till now, DGJG has given away 24kgs of gold and 3 BMW cars to 99 lucky winners.
The third weekly draw on the 19th of January was graced by Mr. Fattallah Abdullah Fattallah, Manager, Dubai Economic Department, Mr. Vince Cook – CEO, National Bank of Fujairah, Mr. Chandu Siroya – Vice Chairman, Dubai Gold & Jewellery Group, Mr. Shamlal Ahmed –Managing Director, Malabar Gold & Diamonds, Mr. John Paul Alukkas – Executive Director, Joyalukkas Group, Mr. Tomy Joseph – General Manager, Dubai Gold & Jewellery Group.
Each year DGJG have come up with innovative promotional campaign to boost the jewellery sales, thereby giving astonishing opportunities to the shoppers to shop and reward themselves with mega prizes. DGJG has been playing an important role in enriching DSF's events by offering spectacular prizes and has helped turned around the lives of many lucky winners.
Tawhid Abdullah, Chairman, Dubai Gold & Jewellery Group said “Gold & diamond jewellery are the best gift options and certainly a value asset for your friends and family. The gold price is at affordable levels, it is the best time for those who look at gold and jewellery as a safe investment while trying their luck to win a fortune. With an excellent chance of winning one kilogram of gold every day, this year’s DSF is an exciting time for gold jewellery shoppers. Adding to the excitement, we also have an exclusive diamond promotion campaign wherein consumers can win a BMW luxury car every week of the festival. DSF brings in more tourists; with Dubai’s strong positioning as the ‘City of Gold’ and ‘Jewellery Destination of the World’, gold and jewellery purchases are on the shopping list of most visitors.”
As a testimony to DGJG’s commitment to promote Dubai as the City of Gold, the promotional campaign will see over 300 jewellery retail outlets across Dubai coming together to host the first of its kind DSF promotions.
He added “Dubai Shopping Festival has always been a peak sale season for Dubai’s jewellery trade. So far, our promotions is being received very well and expecting an increase of 20-25% in jewellery sale by the end of the promotion.”
Ahmed Al Khaja, CEO of Dubai Festivals and Retail Establishment (DFRE) added: “Dubai Shopping Festival is one of the most popular annual events in our robust retail calendar and supports our continued efforts to boost Dubai’s retail economy and make it a world-class shopping destination. Dubai Gold & Jewellery Group (DGJG) continues to play a significant role in enhancing the excitement of the festival, providing shoppers with unmissable chances to win gold, diamond and jewellery, as well as life-changing cash prizes. We are encouraged to hear the stories of successful winners and thank our strategic partners for their ongoing commitment in making raffle promotions a highly attractive element of the annual festival.”
National Bank of Fujairah (NBF) being the official banking partner of this campaign has added to the shopping excitement by doubling the chance of winning a BMW. Shoppers are entitled to get two coupons instead of one to participate in the diamond raffle draw, on a minimum spend of AED 500 using NBF debit or credit card.
Vince Cook, CEO National Bank of Fujairah said “We are proud to be joining forces with the Dubai Gold and Jewellery Group (DGJG) and becoming the official banking partner for the DSF promotion campaign. As one of the leading financiers of the gold and diamond industry in the UAE, NBF is dedicated to expanding its footprint in the sector by seeking forward-thinking partnerships and opportunities. We are very happy to have this opportunity to help incentivize customers to invest in gold and diamond jewellery by offering them the chance to win grand prizes. We see this as an integral part of NBF’s commitment to this sector. We also look forward to continue working with our partners to cement Dubai’s position as one of the leading gold and diamond centers in the world.”
GOLD JEWELLERY RAFFLE PROMOTION
Upon the purchase of AED 500 from any of the participating jewellery outlets, customers will be entitled to one raffle coupon that can win them;
DIAMOND JEWELLERY RAFFLE PROMOTION
Upon the purchase of AED 500 from any of the participating jewellery outlets, customers will be entitled to one raffle coupon that can win them;
Dubai Gold and jewellery industry is one of the very few industries that unite under one umbrella to offer such grand promotions consistently for the past 24 years. The group has given away more than 900 kilograms of gold over the last 23 years, more than any other establishment in the world.


Increasing Use of Screen-Time Causing Eye Problems in UAE Students