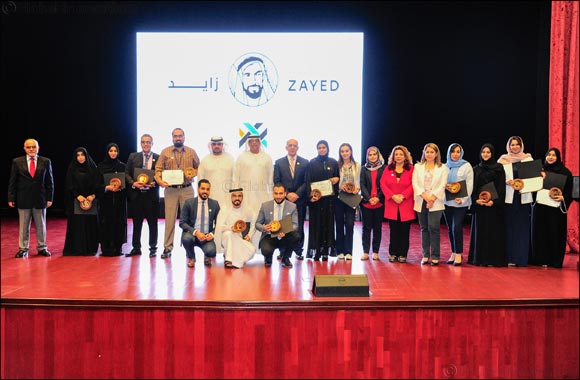 Abu Dhabi, United Arab Emirates- 21 January 2019:   Abu Dhabi University (ADU), an internationally recognized academic institution for quality education and applied research, today hosted a closing ceremony marking the end of its Year of Zayed program. The ceremony, which was attended by faculty and students, touched upon the milestones achieved by ADU during 2018, which served to commemorate and carry forward the legacy of the UAE’s founding father, Sheikh Zayed bin Sultan Al Nahyan.

The ceremony saw ADU celebrate the results of its Year of Zayed strategy, which was launched in early 2018. The university’s Year of Zayed program included a series of exhibitions, conferences, seminars and student-led initiatives designed to honor the late Sheikh Zayed’s legacy. The holistic program was carried out across all three ADU campuses, focusing on areas reflecting the Year of Zayed’s core pillars, such as social engagement, environment, healthcare and philanthropy.

Professor Waqar Ahmad, Chancellor of Abu Dhabi University, commented: “In line with our founder’s vision of an all-inclusive future, our students have come together, from diverse backgrounds, to produce and take part in remarkable initiatives, reminding us that the future is in their hands. At ADU, our first priority is to deliver the highest level of education to our students. We strive to create a balanced experience for them that fosters creativity and innovation, providing each student with a toolkit that will develop their talents, skills and intellect, whereby they can confidently take on roles as the leaders of tomorrow.”

Among the most notable occasions during Year of Zayed were: the announcement of the Sheikh Zayed scholarship for martyr’s children, the launch of the health awareness campaign, the Sheikh Zayed Walkathon, the Year of Zayed reading competition, Kunooz Zayed competition, and the launch of the UAE’s first ‘Zayed and Social Responsibility’ forum. ADU also entered the Guinness World Record books in March for the creation of the world’s largest notebook mosaic depicting the Year of Zayed logo.

Professor Ahmad continued, “I would like to express my sincerest gratitude and appreciation towards all of our students and faculty for their ongoing efforts and commitment. Universities can house the most dedicated educators and state-of-the-art facilities, but it’s the students’ hard work that leads to the institution’s success. I can say with confidence that I am truly impressed with the caliber of the students at this University.”

As the UAE embarks upon the Year of Tolerance in 2019, ADU is on track to announce a refreshed strategy alongside a program of student-focused initiatives to celebrate cultural and religious tolerance.