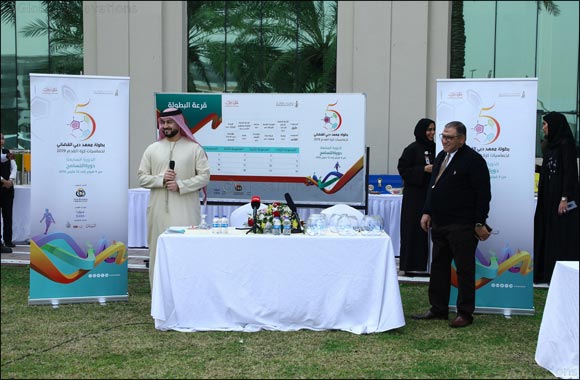 Share Home >> Entertainment
Dubai, United Arab Emirates, 28th January 2019:   Dubai Judicial Institute (DJI) announced that this year's ‘7th DJI Football Tournament 2019’ will be under the theme of ‘Tolerance Tournament,’ in line with the ‘Year of Tolerance’ initiative announced by HH Sheikh Khalifa bin Zayed Al Nahyan, President of the UAE. The tournament will kick-off on 4 February, and the finals will be held on 12 March 12.
During the press conference held on Thursday, 24 January, the teams representing the participating entities and institutions were selected in the presence of HE Justice Dr Jamal Al Sumaiti, Director General of DJI; a number of VIPs; and representatives from local media outlets.
Al Sumaiti said: 'We are pleased to announce the activities of this tournament that we are organising with unprecedented success for the seventh consecutive year, especially as it attracts the elite entities in Dubai with every edition. This year, we are honoured to launch the tournament under the theme ‘Year of Tolerance’ in line with the strategies and visions of our wise leadership to consolidate one of the highest values characterised by the Founding Father Sheikh Zayed bin Sultan Al Nahyan. As with every year, the tournament will gain the attention of the media and public, instilling a sense of cooperation in them and encouraging young people in our departments and institutions to maintain their fitness.'
Based on the draw — held at DJI’s headquarters — the participating teams were divided into five groups:
Al Sumaiti added: 'We are proud of our ability to achieve the goals set for this tournament, in particular, the dissemination of sports culture and sportsmanship among different segments of society as well as the spreading of happiness and positivity among players and the public to contribute to making Dubai one of the happiest cities in the world. These goals also have a positive impact on health benefits and enhancing fitness. We look forward to establishing friendly relationships between the players in the competing teams and the institutions they represent, which will be beneficial for the government's performance in the Emirate.'
The first round will consist of 30 matches, taking place from Monday, 4 February till Sunday, 17 February. The following 20 matches will comprise the second round taking place from Tuesday, 19 February to Tuesday, 5 March. The semi-finals, which will include two matches, will take place on Sunday, 10 March, and the final match will be held on Tuesday, 12 March 2019.
The winning team will be awarded the tournament cup, 12 gold medals, and 12 gifts in kind, while the runner up will earn the silver cup and 12 silver medals.
There will also be an additional six cups that will be awarded in the following categories: championship goals, best player, best goalkeeper, best manager, Cup of Fair Play, Cup of Tolerance.
The first edition of the DJI Football Tournament was launched in 2013 with the participation of eight teams, with the winner being the Public Prosecution. The winners of the following five editions were won in the following years respectively by Dubai Customs, Dubai Electricity and Water Authority, Dubai Police, Public Prosecution Dubai, and Dubai Civil Defence.
Sponsors of the 2019 tournament included: Union Coop (Golden Sponsor), Sirma Water (Silver Sponsor), Al Bayan newspaper, Dubai Sports TV and Al Barajeel (Media Sponsors).