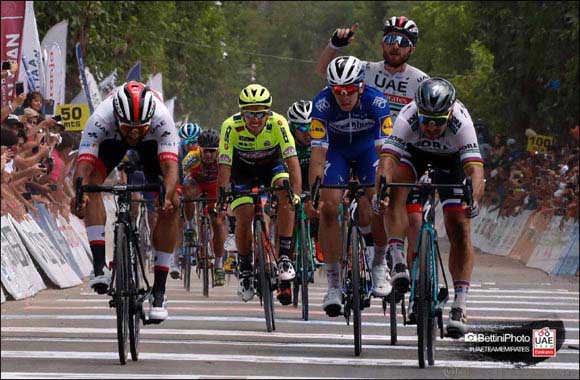 Share Home >> Entertainment
Dubai, UAE, January 31, 2019:  In his second bunch sprint finish of the Vuelta a San Juan, UAE Team Emirates’ fast man Fernando Gaviria took a well-earned win, doubling his tally of 2019 victories after only four days of competitive racing. The Colombian sprinter continued his run of fine form, building on his opening stage success last Sunday.
This time, the 24-year-old saw off three-time world champion Peter Sagan (Bora-Hansgrohe) to claim the honours and close the gap on the top spot in the race for the General Classification (GC).
It was a gallant team effort, with Italian Simone Consonni providing the perfect lead out for Gaviria. As the bunch hit the 200 meter mark, a quartet of riders battled it out in a thrilling end to the fourth stage, with Consonni being rewarded for his hard graft by picking up a fourth place finish of his own.
UAE Team Emirates continues to dominate the GC standings as it approaches the final three stages, with Fernando Gaviria in second place, Valerio Conti in third and Simone Consonni in seventh. UAE Team Emirates also maintains control of the team classification thanks to the riders’ individual positions as it looks to claim the second team classification win of the year, having already picked up the award at the Santos Tour Down Under.
Commenting on another victory, Fernando Gaviria said: “It’s great to win a second time here, paying back the work of the team who fought those other teams and helped me for the sprint finish. Thanks to my team-mates for their support. It was a high level sprint, against serious rivals like Sagan and Hodeg. The team was perfect in the approach of the last curve, then Consonni was very good at launching me. It was a special stage, because here one year ago I went home in an ambulance. I will try to enjoy the rest day and then we will see what happens on the stage to Alto Colorado. I’ll try to hold on, the General Classification is difficult but I’ll try. Much will depend on my legs on the climb, but I’m only eight seconds from the leader so I’m going to push as much as possible.“
Stage 4 results
1 Fernando Gaviria (UAE Team Emirates) 4h20’26”
2 Peter Sagan (Bora-hansgrohe) s.t.
3 Alvaro Hodeg (Deceuninck-Quick Step) s.t.
4 Simone Consonni (UAE Team Emirates) s.t.
General Classification after Stage 4
1 Julian Alaphilippe (Deceunicnk-Quick Step) 11h35’42”
2 Fernando Gaviria (UAE Team Emirates) 8″
3 Valerio Conti (UAE Team Emirates) 22″