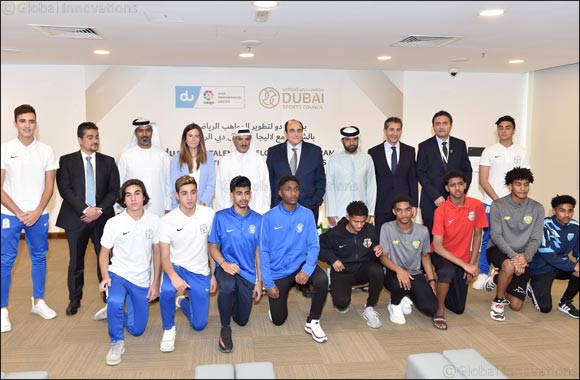 The announcement was made during the press conference held today at Dubai Sports Council, headed by HE Saeed Hareb, Secretary General of Dubai Sports Council, Mr Osman Sultan, CEO of Emirates Integrated Telecommunications Company (EITC) and LaLiga delegate Maite Ventura, in the presence of Hussein Murad, CEO of Inspiratus.

du LaLiga High Performance Centre, which was established in 2016 to train and develop UAE’s top football talents to LaLiga standards in preparation for professional football careers, has quickly become a scouting ground for national and regional clubs, and national teams. It is run by LaLiga Pro-UEFA certified coaches delivering year-long intensive training and development programs at the same level as those provided at LaLiga clubs in Spain, which has created the world’s best players.

Under the new partnership between the Dubai Sports Council and du LaLiga High Performance Centre, two players from each of the four Dubai clubs - Al Nasr, Al Wasl, Shabab Al Ahli and Hatta - will join the du LaLiga HPC summer program in Spain, where they will raise their level of play in competitive matches against the best LaLiga youth clubs.

In preparation for this trip, they will undergo intensive training during the month of June at the du LaLiga HPC and continue their training as well while in Spain.

Announcing the partnership, HE Saeed Hareb said: “We are really excited about the launch of this new partnership between Dubai Sports Council and du LaLiga High Performance Center, especially since it focuses on the development of top talented players from Dubai clubs, which is one of Dubai Sports Council’s strategic objectives from the outset.

“This partnership capitalises on the unrivaled world-class talent development program at du LaLiga High Performance Centre, in partnership with the strongest league in the world, which is already producing talent for our national clubs.

“The du LaLiga HPC is recognised as the gold standard in professional football development and we are delighted that high potential talents – one striker and one goalkeeper - from Al Nasr, Al Wasl, Shabab Al Ahli and Hatta will join the du LaLiga HPC summer program in Spain, where they will raise their level of play in competitive matches against the best LaLiga youth clubs, after intensive training during the month of June at the du LaLiga HPC here.

“Through our partnership with du, a visionary leader, and LaLiga, the strongest league in the world, we will be working together to take UAE’s professional football development to the next level.”

Osman Sultan, CEO of EITC, said: “We are proud of our partnership with Dubai Sports Council, which allows us to continue to fulfill our social responsibility mission to support the development of youth football in the UAE.

“We remain committed to deliver on our vision to produce world-class footballer right here from the UAE through du LaLiga High Performance Centre, which is an incubator of talent and is producing a pipeline of professional footballers for clubs and national teams. We are especially proud to be of service to local UAE clubs and the UAE national team, and to support their efforts to elevate the level of football in the country and prepare them for competitions at the international level, the first being the World Cup 2022.”

Fernando Sanz added:“We are delighted to partner with Dubai Sports Council and du, leveraging LaLiga’s technical capabilities and experience in producing world-class talent. We look forward to a great collaboration that aims to nurture and elevate the level of football in the UAE and prepare youth here to compete at international levels.”