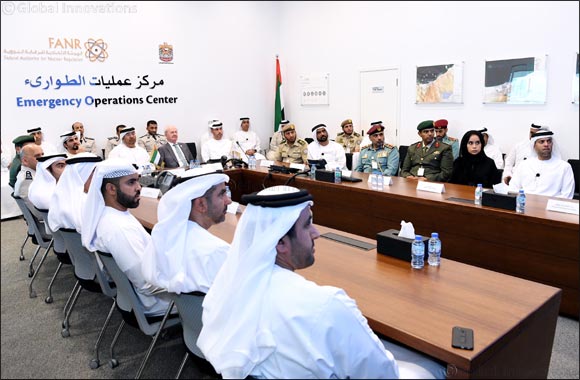 28 March 2019, Abu Dhabi, United Arab Emirates:   The Federal Authority for Nuclear Regulation (FANR), the nuclear regulator in the UAE, inaugurated its Emergency Operations Centre (EOC) at its headquarters in Abu Dhabi. The Emergency Operations Centre will be key in ensuring FANR’s emergency preparedness and readiness to respond to any nuclear or radiological emergencies in the UAE. This comes to streamline FANR’s mission to protect the public and the environment from radiation risks.

The organizational structure of Emergency Operations Centre comprises of multiple functions that include nuclear assessment, radiological assessment, nuclear security team, communication team and others. The structure of the centre includes highly qualified and trained employees who are able to assess nuclear or radiological accidents.

FANR’s EOC is a state-of-the art centre equipped with advanced technologies that enable it to advise and coordinate with national entities and the International Atomic Energy Agency (IAEA) to support the effective response efforts in case of any nuclear or radiological accident .

The Emergency Operations Centre will shoulder key roles per the UAE nuclear law, which mandates FANR to establish measures for emergency preparedness and response. The centre will provide technical advice to government entities in case of an accidents including radiation protection, precautionary action to support protection of the public and the environment.  FANR is part of UAE’s Barakah’s off-site Nuclear Power Plant Emergency Response Plans, which includes a number of national and local entities responsible for response to the incident commander (Abu Dhabi Police) in case of a nuclear accident.

The UAE is part of international conventions such as the Convention on Early Notification of a Nuclear Accident and request of assistance, which designates FANR’s as UAE National Warning Focal Point, competent authority for domestic and abroad for nuclear or radiological emergencies that notifies the IAEA through FANR EOC the.FANR also, among national entities, plays a key role in participating to respond to nuclear or radiological incidents that might occur in the GCC region under the umbrella of the GCC Emergency Management Center, which is based in Kuwait.

“Today’s inauguration of the FANR’s Emergency Operations Centre marks an important milestone. The Centre will play an indispensable role in strengthening FANR’s mission to protect the public and the environment from radiation risks. We are committed to build Emirati capacity in nuclear emergency preparedness and response as part of our long-term plan,” said Chairman of FANR, H.E. Abdulla Nasser Al Suwaidi.

FANR’s EOC organizes and takes part in exercises and drills to build national capacity to assess nuclear or radiological emergencies in cooperation with national and international stakeholders. It plans to organize or take part in 15 drills planned in 2019, which includes testing FANR’s emergency plans, assessing readiness and build capacity in various functions of the centre.

Since its establishment in 2009, FANR has developed and issued regulations and guidelines related to emergencies to ensure the protection of the public and the environment from radiation risks during emergencies as per the UAE Nuclear Law and international Law.