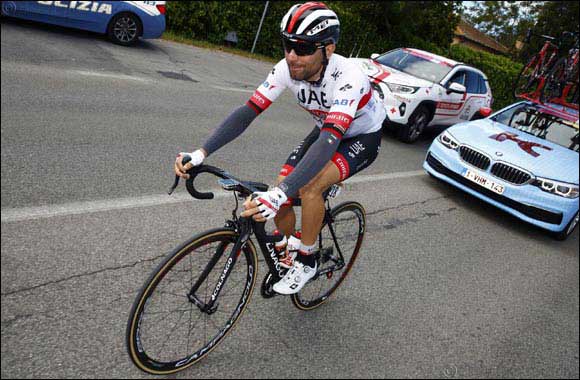 Ulissi Makes Top Three on Day Four of the Giro

Share Home >> Entertainment
UAE Team Emirates’ Diego Ulissi shone on Stage four of the Giro as late crashes impacted the peloton.
Dubai, United Arab Emirates - May 15, 2019:   It was another drama-filled day, as once again late crashes changed the dynamic of the race coming into the closing stages. With the peloton approaching the 12km to go mark, the first crash took down a handful of riders. Luckily, none of UAE Team Emirates’ stage hopefuls were impacted, but it was the second larger crash 6.1km from the finish that blocked the road and caused the bulk of riders to come to a standstill, including the Points jersey wearer, Fernando Gaviria.
However, emerging with the front group were three men in the UAE Team Emirates jersey, in prime position as they entered the final kilometre – amongst them, Diego Ulissi. His teammates – Marco Marcato and Valerio Conti – provided a small lead out train, with the Italian showing great strength on the short climb to the finish line. An early attack from Richard Carapaz (Movistar Team) paid off, with the South American crossing the line to take first place, followed by Caleb Ewan (Lotto Soudal) and Ulissi in third. Valerio Conti was also rewarded for his efforts, placing seventh.
The result sees Ulissi jump eight places in the GC and break into the top five, where he sits 44” seconds behind the leader, Primoz Roglic (Team Jumbo-Visma).
Commenting on the top three finish, Ulissi said: “When the crash occurred, I managed to be in the front of the group and to avoid being stopped. I was with Marcato and Conti and we tried to set a high pace, being aware that the final part of the course was not so steep, and that there still were sprinters such as Viviani, Demare, Ackermann and Ewan with us.
Carapaz was perfect in seizing the time of his action, then Ewan’s sprint was very fast, so I was third. When Carapaz attacked, I waited for someone to react but no one did. Obviously I would have preferred to win, but considering that the final was not so demanding and that we did the best to make it difficult, I have no regrets.”
Stage five will see riders start with an uphill battle, as they set out on the 140km route from Frascati to Terracina. There are two early climbs, with another at just over the half way stage and should the breakaway be in form, they just might have the chance to steal a stage win.
Stage Four Results
1. Richard Carapaz (Movistar Team) – 5:58:17
2. Caleb Ewan (Lotto Soudal) – “
3. Diego Ulissi (UAE Team Emirates) – “
General Classification Standings
1. Primoz Roglic (Team Jumbo-Visma) – 16:19:20
2. Simon Yates (Mitchelton-Scott) – “35
3. Vincenzo Nibali (Bahrain Merida) – “39
5. Diego Ulissi (UAE Team Emirates) – “44