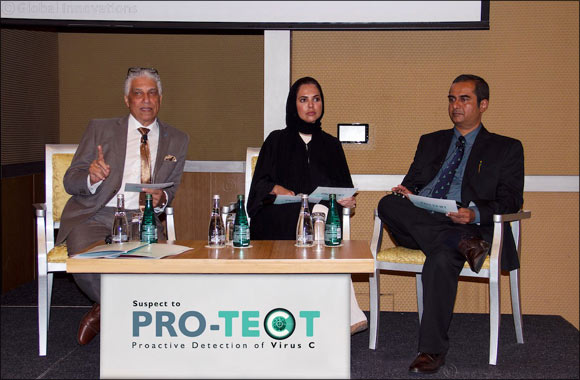 UAE on track to eliminate Hepatitis C by 2030

Dubai, UAE - 23 June 2019:   With the prevalence rate of Hepatitis C (HCV) being under 2% in the United Arab Emirates (UAE), the country is close to reaching the World Health Assembly’s goal of eliminating the virus by 2030. Through providing educational programs for healthcare professionals, Gilead Sciences Middle East supports the UAE Ministry of Health and Prevention (MOHAP) and Dubai Health Authority’s efforts towards the early detection and diagnoses of HCV.

“While the prevalence of HCV is low in the UAE, early detection and treatment is paramount to preventing health problems that may result from infection, as well as preventing the transmission of the virus. Physicians should feel empowered to drive HCV screenings and be fully equipped with the knowledge and tools required for early detection and treatment of the disease in patients, in efforts to eliminate the disease by 2030,” commented Dr. Mohamed Farghaly, Director of insurance policies and health economics Assoc. Professor, Dubai Medical College, DHA.

In 2016, the World Health Assembly endorsed the Global Health Sector Strategy (GHSS) on viral hepatitis, calling for the elimination of viral hepatitis as a public health threat by 2030. The strategy aims to reduce new infections by 90% and mortality by 65% .

The Eastern Mediterranean region, of which the UAE is a part, has the highest estimated prevalence rate (2.3%) globally, with approximately 15 million people chronically infected with HCV . With the exceptions of Egypt and Pakistan, which carry the largest burden, HCV prevalence in other countries in the region is relatively low (approximately 1%), which is comparable to most countries globally . HCV prevalence of the disease in the UAE ranges from 0.24% to 1.64% .

Globally, HCV testing and diagnosis remains inadequate, especially among most at risk populations. However, the UAE has made major strides in developing interventions that lead towards the elimination of HCV by 2030. Government bodies such as the MOHAP and Dubai Health Authority recently launched awareness campaigns ‘Ready to be Hepatitis C Cured’ and ‘Dubai without C’ respectively, to drive awareness about the disease, diagnosis and early detection among residents.

In line with these efforts, leading primary care physicians gathered in the UAE at the Gilead Sciences Pro-Tect program ‘Towards cure among high risk populations’ to discuss gaps and barriers in care models for most at risk population. The CME-accredited program was endorsed by the Emirates Medical Association - Gastroenterology and Hepatology Society and focused on educating physicians about the burden of HCV, the value of its cure, simplification of HCV treatment and clinical case studies.

“Many people are often faced with barriers to testing and linkage-to-care. These barriers include lack of awareness, knowledge and understanding that can lead to stigma and discrimination. Therefore, focused testing for most affected populations would help us solve the problem. Success is possible if there is easy and increased access to HCV testing and more people get tested. At the same time, we need to work together to develop care models that would simplify the HCV testing and treatment,” said Dr. Nawal Al Nahdi, Consultant Gastroenterologist & Hepatologist, Rashid Hospital – DHA.

By creating a continuous medical education platform that empowers local, regional and international healthcare experts to connect and exchange ideas, Gilead Sciences reaffirms its commitment to the Middle East and educational efforts for gastro hepatologists and primary care physicians.