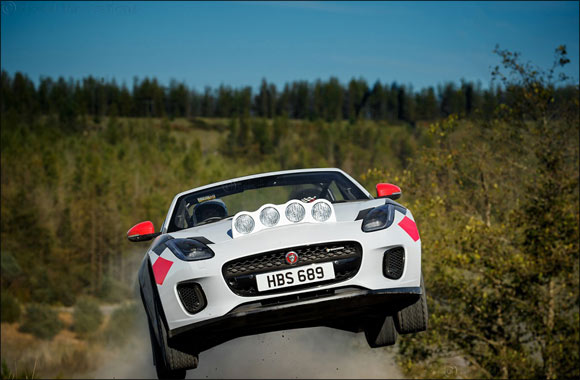 Share Home >> Automobile
• New Defender prototype to continue testing programme on the hill ahead of global reveal later this year
• Electric Jaguar eTROPHY one-make race car to make Goodwood debut
• Range Rover Velar SVAutobiography Dynamic Edition, Jaguar XE SV Project 8 Touring Pack and F-TYPE SVR to thunder up the hill throughout the show
• Jaguar F-TYPE Rally car will drift through the rally course every day
• Jaguar and Land Rover Top Trumps is back offering prizes by competing in a digital version of iconic game
• Dynamic passenger experiences for festival visitors on the Jaguar Land Rover stand
Dubai, United Arab Emirates -  04 July  2019:    Jaguar and Land Rover will be debuting a series of exciting new models at this year’s annual celebration of all things automotive; the Goodwood Festival of Speed.
Continuing the most demanding test regime of any pre-production Land Rover to date, a camouflaged prototype Defender will be putting its on-road dynamic abilities to the test on the hill in the ‘First Glance’ batch twice daily.
Taking a short break from the world's first all-electric production based international race series supporting Formula E, the all-electric Jaguar eTROPHY I-PACE race car will be silently storming the Goodwood Hill every day in front of the Goodwood crowds for the first time. At the other end of the spectrum, and making use of their 600hp and 550hp respectively, the recently-unveiled Jaguar XE SV Project 8 Touring Pack the new Range Rover Velar SVAutobiography Dynamic Edition will feature in the First Glance batch. British rally driver, Jade Paveley will be returning to the Goodwood Rally stage to push the limits of the one-off Jaguar F-TYPE rally car throughout the weekend.
Jaguar Land Rover will continue to welcome guests from around the world to its stand where all the product ranges will be on display with visitors being invited to get involved in the action too. Whether experiencing the thrill of the Jaguar F-TYPE from the passenger seat on the handling course or enjoying the ups and downs of Land Rover’s legendary off-road course in a Discovery or Range Rover, there is something for everyone
Jaguar Land Rover UK Managing Director, Rawdon Glover said: “Annually, Goodwood Festival of Speed is our largest event, and we have pulled the stops out this year to bring our award-winning Jaguars and Land Rovers to both our stand and the hill.
“We have created an inviting space for customers to come and spend some time with the team and we remain one of the only stands to offer in-car experiences which have proved incredibly popular with festival goers.
“I myself am particularly excited about seeing the new Defender testing on the hill, and I know our customers will love the thrill of a passenger ride in our Jaguar F-TYPE on our handling circuit or a Land Rover on the off-road course.”
Launched at last year’s Goodwood Festival of Speed, the Jaguar Land Rover Top Trumps app is back with a slick new design and 30 extra cars (a mixture of both new and classic models).
Additionally, new limited-edition packs will be available to claim on first come-first served basis at Jaguar Land Rover stand or by post via the app.*
Anyone who downloads the app, aged 18 years and over, and holds a full UK driving licence can also win prizes including Land Rover driving experiences, if they play the app during this year’s show.
The new version of the app is available now and can be found on both App Store and Google Play.