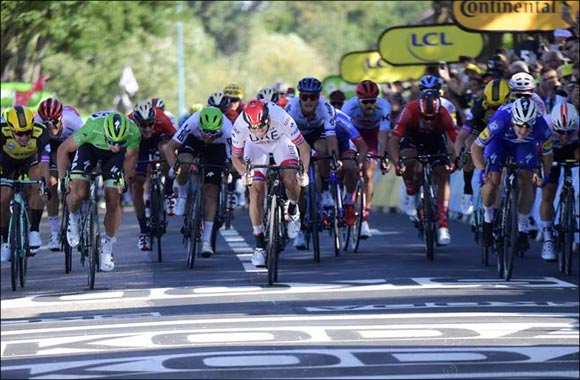 Share Home >> Entertainment
Dubai, United Arab Emirates -  09 July  2019:   UAE Team Emirates’ lead sprinter, Alexander Kristoff, showed off his form with a hard fought second place in stage 4 of this year’s Tour de France. Kristoff opened up his sprint in the final 200m after being perfectly led out by Jasper Philipsen. The Norwegian power house looked like he would take the victory, but was narrowly beaten to the line by Elia Viviani (Deceuninck Quick Step) after more than five hours of racing.
Stage 4 from Reims to Nancy was a relatively flat affair, with only two short inclines for the peloton to crest during the 213.5km route. The day was set-up for pure sprinters, who were all present with their lead out trains in the final run-in to the line. With 3kms to go Kristoff was able to work his way to the front of the bunch, safely guided by his team mates and, just as the finish line came into sight, Kristoff exploded into action up the final 200m drag. His effort was rewarded with a second place spot, holding off both Caleb Ewan (Lotto Soudal) and Peter Sagan (Bora Hansgrohe).
Talking after the race, Kristoff said: “Today the team did a super job for me and put me in a perfect position. I didn’t have to use too much energy during the race so it was set up for me to win, but Viviani was just a little faster at the end. I was there fighting with him side by side and if I had a bit extra to give I would have made it.
So, it was a bit disappointing but I am still proud of a second place and I will continue to work towards a stage win.” Commenting on his lead out, Kristoff continued “Jasper was the perfect lead out man for me. Today he showed how talented he is for such a young rider. He rides with passion and on feeling and has proved he is more than good enough to be at the Tour. This gives me confidence for the rest of the race.”
Jasper Philipsen added: “I think we did what they expected of us. It wasn't easy to be at the front, but Bystrøm is experienced in these situations so I followed his wheel. I gave it everything in the last 500m and then Alexander came around me fast and missed the win by just a little bit. I think we can be happy with the performance and maybe next time go one place better.”
Tomorrow the Tour heads further east and skirts the France-Germany border for Stage 5, with a 175.5km hilly route from Saint-Die-des-Vosges to Colmor. It’s a stage that will favour the breakaway specialists with four categorised climbs and a flat 10km run in to the line.
Stage 4 Results
1. Elia Viviani (Fra) Deceuninck Quick Step 5:09:20”
2. Alexander Kristoff (Nor) UAE Team Emirates s.t.
3. Caleb Ewan (Aus) Lotto Soudal s.t.
General Classification
1. Julian Alaphilippe (Fra) Deceuninck Quick Step 14:41:39”
2. Wout Van Aert (Bel) Jumbo Visma +0:20”
3. Steven Kruijswijk (Ned) Jumbo Visma +0:25”