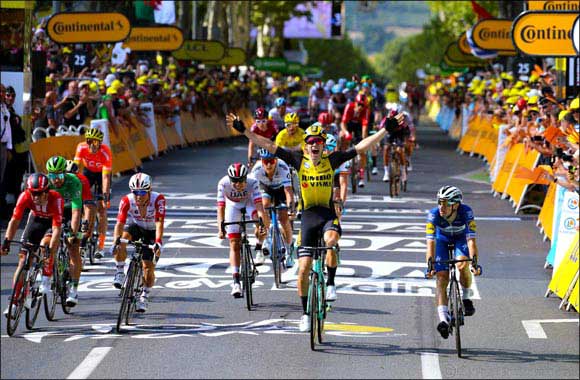 Share Home >> Entertainment
Dubai, United Arab Emirates -  16 July  2019:  UAE Team Emirates’ Jasper Philipsen secured a top 10 finish on stage 10 of the Tour de France after a thrilling sprint finish in the French town of Albi.
It was a tough day at the saddle with strong winds, evident as the peloton got to the final 60km and the pace was upped in an attempt to reign in the breakaway that had led the race until then. With 20km to go, an echelon was opened and the peloton fractured into three groups, with the first making sure they pulled away. The relentless pace kept going till the finish line, with Jasper Philipsen showing his potential to compete with some of cycling’s top sprinters. The photo-finish confirmed Wout Van Aert (Team Jumbo-Visma) took the stage win, Philipsen was sixth.
It was also a positive result for UAE Team Emirates’ General Classification (GC) hopeful, Dan Martin. Working closely with Sven Erik Bystrøm to get through the echelons, the Irishman finished with the head group and gained time on some riders in the overall standings. He now breaks into the GC top 10 - 2”09 behind leader Julian Alaphilippe (Deceuninck - Quick Step).
Commenting on the finish, Philipsen said: “Sven helped me in the sprint to put me in a good position, but it was difficult to break into the trains of the other teams. I was a little bit far behind and they launched the sprint from far back, but I was just missing that bit of power to be that little bit closer.”
Dan Martin added: 'Even from the first kilometre it was stressful. Everybody knew with the wind it was dangerous and when you have over 200km when it can happen at any moment, you always need a bit of good luck to be in the front. I was always in the top-20 and it was a fight to be there.
When Deceuninck and Ineos made the move, Sven came up to me and worked in the wind and brought me to the front. Jasper was there too which was perfect for the sprint. Anything can happen on any day of the Tour and today for us was a good day. We were really focused to make the splits so it's a really nice way to go into the rest day.'
Riders will welcome the first rest day tomorrow, before hoping back on their bikes for Stage 11; a 167km route from Albi to Toulouse.
Stage 10 Results
1. Wout Van Aert (Team Jumbo-Visma) - 4:49:39
2. Elia Viviani (Deceuninck - Quick Step) – “
3. Caleb Ewan (Lotto Soudal) – “
6. Jasper Philipsen (UAE Team Emirates) – “
9. Dan Martin (UAE Team Emirates) – “
General Classification Standings
1. Julian Alaphilippe (Deceuninck - Quick Step) – 43:27:15
2. Geraint Thomas (Team INEOS) – 1:12”
3. Egan Bernal (Team INEOS) – 1:16”
9. Dan Martin (UAE Team Emirates) – 2:09”