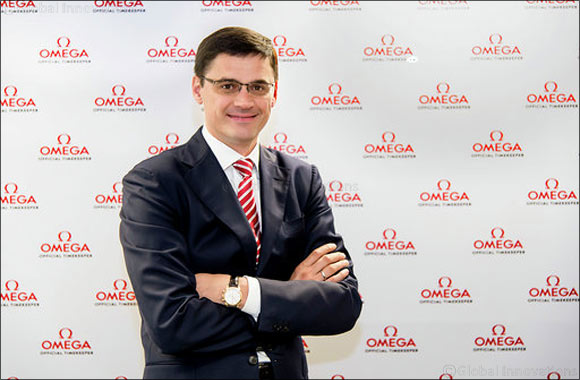 Dubai, United Arab Emirates -  17 July  2019:   OMEGA's association with the sport began back in 1932, when for the first time a single company was entrusted with the official timekeeping for all disciplines at the Olympic Games - including swimming.

The brand's unwavering commitment to precision so impressed FINA, the governing body of aquatic sports around the world, that in 1973, OMEGA was asked to serve as Official Timekeeper at the federation’s first ever world championship.

As well as timing the most important swimming events in the last several decades, OMEGA has been behind the development of the sport's key timekeeping technologies:

From the first semi-automatic timer to the quantum age

Introduced at the 1956 Melbourne Olympic Games, the Swim-Eight-O-Matic was the world's first semi-automatic timing device with a digital display. It allowed timekeepers to distinguish between swimmers who finished virtually at the same time.

It was succeeded in 1972 by the Swim-O-Matic: accurate to the nearest thousandth of a second. As it is often the case with technology, big improvements equaled smaller hardware, and by 1980, the Swim-O-Matic was conveniently packaged in a compact 1.2 kg briefcase.

More recently, the new Quantum Aquatic Timer has redefined timekeeping technology with an enhanced precision of 0.1 parts per million.

But these compact timing units do more than just collect and store running times. They also share information, instantly. On-site and to live-result feeds across the world.

One of the most important innovations in sports timekeeping history; the famous touchpads, introduced in 1967, eliminated the possibility of human error by allowing each swimmer to 'stop' their own time by touching the pad immersed at the end of each lane.

The starting blocks, like those developed for track events, have false start detection systems and acoustic start devices to ensure each competitor hears the start signal at the exact same moment.

At Olympic and World Championship level, OMEGA’s high-speed video cameras are put to work. Judges can consult the cameras if disputes arise. The technology was famously put to the test at the Beijing 2008 Olympic Games, when the electronic timing system determined that Michael Phelps had beaten Milorad Cavic by a hundredth of a second. Four years later in London, the same technology would confirm that Phelps had lost narrowly to Chad le Clos in the 200 metre butterfly, by five one-hundredths of a second: about the time it would take to read any word on this page.

The virtual record line, a popular on-screen graphic that broadcasters love and spectators love even more, electronically superimposes a red line across the pool. This red line represents the world record pace for each discipline. If the lead swimmer finishes ahead of the “virtual record line”, a new record has been set, in the real world.

Not every fan is fortunate enough to be poolside, so OMEGA’s on-screen graphics improve the experience for those watching on television. These graphics identify all the swimmers by name, lane and nationality before each race. As soon as the race has ended, lanes are highlighted to reveal the names and rankings of the top three swimmers. Shortly afterwards, a new display confirms the final rankings, race times and any new records set during the race.

An innovative light system called the Swimming Show was introduced at the London 2012 Olympic Games. This advanced system uses dots of light on the starting blocks to indicate a first, second or third place finish. This simple 1-3 light display allows spectators to check race results at a glance.

The backstroke ledge improves the push and trajectory of the backstroke swimmers, by enabling the competitor to take a higher position in respect to the water level at the start phase. Minimal contact to the water means less counter resistance and a stronger push-off.

The height of the backstroke ledge can be adjusted to several different positions using a manual rotating system.

Used at Olympic and World Championship level, lap counters count remaining laps in the longer 800 and 1500 metre races. Placed one per lane at the bottom of the pool, the swimmer is given a clear count of laps to go, each time they reach the turning end. These highly visible digital screens allow the swimmers to concentrate on their technique, pace and position in the race, while still being aware of how many laps they have left to swim.

How OMEGA times the 100 metre freestyle

OMEGA precisely measures every moment of the 100 metre freestyle, from the start signal to the final touch and every stroke in-between. As well as serving the swimmers and judges, all information gathered is distributed to multiple media outlets, to feed the scoreboards of the world.

High-speed cameras
Take and send 100 images per second to the timekeepers and serve as a back-up system when touchpad results are disputed.

Touchpads
Allow the swimmers to 'stop' time themselves. A force of just 1.5-2.5 kg is enough to immediately stop the clock.

Starting blocks
With adjustable footrests enable the swimmer to dive into the water at an ideal angle.

Loudspeakers
Integrated into each starting block emit the start signal to all competitors simultaneously.

Microphone devices
Provide a start pulse to the timing system at the push of a button.

On the following short video you can watch what timekeeping and data-handling equipment OMEGA uses to measure, record, display and distribute the results of each swimmer participating in the 100 metre freestyle competition:
https://youtu.be/c0ddVEpp3Ho?list=PLE6B23A0EBA9ADD5

Chad le Clos, the South African swimming sensation, has been an OMEGA brand ambassador since 2011. After collecting five medals at the inaugural Youth Olympic Games in Singapore in 2010, there was no doubting his incredible talent. In the same year he claimed two record-breaking golds at the Commonwealth Games, as well as a gold medal in the 200 metre butterfly at the FINA World Short Course Championships.

But it wasn’t until London 2012 that the whole world was able to witness Chad’s amazing ability in the water. In the 200 metre butterfly, he won gold by just 0.05 seconds, edging out his hero Michael Phelps, before winning a silver medal in the 100 metre butterfly.

Only a year later at the 2013 FINA Long Course World Championships, Chad followed his Olympic Games victory by winning both the 200 metre butterfly and the 100 metre fly, where he also set a new national record.

In 2014 he claimed FINA’s Swimming World Cup series for the third time, collecting 27 gold medals along the way and becoming the first ever swimmer to go unbeaten throughout a World Cup series. Later that same year he was crowned FINA Male Swimmer of the Year.

When the Olympic Games arrived in Rio in 2016, Chad added more medals and achievements to his impressive tally, picking up silver in both the 200 metre freestyle and 100 metre butterfly.

2017 was another big year for the young swimmer, with a gold medal for the 200 metre butterfly at the World Aquatic Swimming Championships in Budapest and an extraordinary run of victories at the FINA Swimming World Cup series, culminating in a convincing win in the 100 metre butterfly in Singapore, where he was crowned Men's Overall Winner for the fourth time.

With an unprecedented total of 28 Olympic Games medals, Michael Phelps is often considered the greatest Olympian of all time. He has made an indelible mark in the world of sports.

Michael won his first six gold medals at the Athens 2004 Olympic Games, and in 2008 at the Beijing Games he dominated every event he entered winning a total of eight gold medals. His paramount success continued at the London 2012 Olympic Games where, while the world was watching, he won his record-setting 18th gold medal.

Following the Games in London, Michael announced that he would no longer take part in competitive swimming, but at Rio 2016 he made a glorious return, winning five gold medals and one silver.

OMEGA is honoured to count Michael as part of its family of inspirational and successful ambassadors. His dedication and determination to achieve goals and set new standards is an inspiration to every Olympic athlete.

Alexander Popov is considered to be one of the greatest sprint freestyle swimmers of all time. At the age of 20, he won a historic 50 and 100 metre freestyle double at the Barcelona 1992 Olympic Games before repeating the feat in Atlanta four years later.

Renowned for his powerful style and smooth technique, the winner of four Olympic Games gold medals became an OMEGA ambassador in 1997. Dubbed the Ice Man on account of his calmness, Alexander is one of swimming's great role models and has been a positive influence on the sport's rising stars.

At home in the water

This 43.5 mm stainless steel Seamaster Planet Ocean features a blue ceramic dial with Arabic numerals, a date window at the 3 o'clock position and blue ceramic unidirectional bezel with OMEGA Liquidmetal™ diving scale. Water resistant to 600 metres and equipped with a helium-escape valve, it can handle every kind of aquatic adventure, from a dip in the pool to a dive in the deep. Presented on a stainless steel bracelet with patented extendable foldover clasp, it's powered by the OMEGA Master Chronometer Calibre 8900, which can be seen through the transparent caseback.

ICSFS Recognised for its Core Banking Implementation by IBSI

Grohe's “Green Mosque” Initiative Ranks Fourth in The Best PR Campaigns for This ...