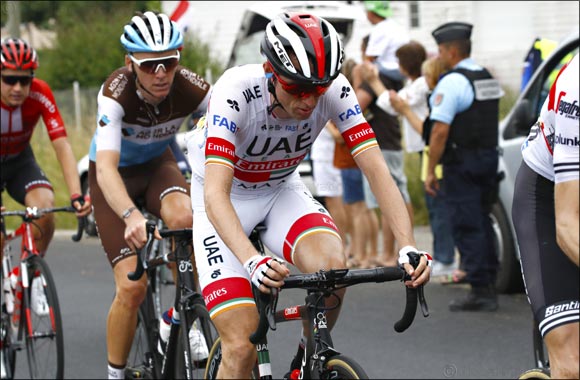 Share Home >> Lifestyle
Dubai, United Arab Emirates -  22 July  2019:    It was a menacing day at the Tour de France, as UAE Team Emirates’ Dan Martin battled what he described as one of the toughest Tour stages he has ever faced.
The peloton knew it was all to play for on the fifteenth stage, but with four categorised climbs to contend with, they knew it was also going to be a brutal stage; and that it was. The attacking intent of all teams was evident from the off, and as the 36-man breakaway came over the first climb, Martin held a comfortable position. But with climbs coming thick and fast, a number of riders attacked and those with weary legs were soon dropped. Martin looked to attack one of the smaller breakaway groups as he began to ascend the final climb, but the sheer incline proved too much.
Simon Yates (Mitchelton Scott) produced a solo breakaway effort on the final climb to take home the stage win, with Martin finishing 3:38” behind the winner. Martin now sits in 15th place (11:39”) in the General Classification (GC) whilst teammate Fabio Aru occupies 17th place (14:15”), behind the GC leader Julian Alaphilippe (Deceuninck - Quick Step).
Commenting on the finish, Martin said: “It was a brutal out there today. We expected a big group to go early, and after the disappointment of yesterday I wanted to be in the race again and enjoy racing. I didn’t think they would let me go, so I waited until it was really hard and then made the split on the climb. I’m looking forward to the rest day now. I’ve been riding GC for two weeks and with yesterday not going to plan, I’m just a bit disappointed to be caught when I did. It’s probably the hardest stage I have ever done at the Tour de France.”
UAE Team Emirates’ Fabio Aru added: “Today it was a very demanding stage and raced at a very high tempo. I stayed in the main group as long as I could. I’m not 100% yet, but tomorrow we will rest and then we’ll see how to face the last week.”
Riders will welcome the second rest day tomorrow, before taking to the saddle for stage 16, where the sprinters will be back in action as they tackle a flat  route through Nimes.
Stage 15 Results
1. Simon Yates (Mitchelton Scott)  4:47:04
2. Thibaut Pinot (Groupama FDJ)  + 0:33”
3. Mikel Landa (Movistar Team) “
21. Dan Martin (UAE Team Emirates) + 3:38”
General Classification Standings
1. Julian Alaphilippe (Deceuninck - Quick Step) – 61:00:22
2. Geraint Thomas (Team INEOS)  +1:35”
3. Steven Ruijswijk (Team Jumbo-Visma) +1:47”
15. Dan Martin (UAE Team Emirates) +11:39”
17. Fabio Aru (UAE Team Emirates) +14:15”