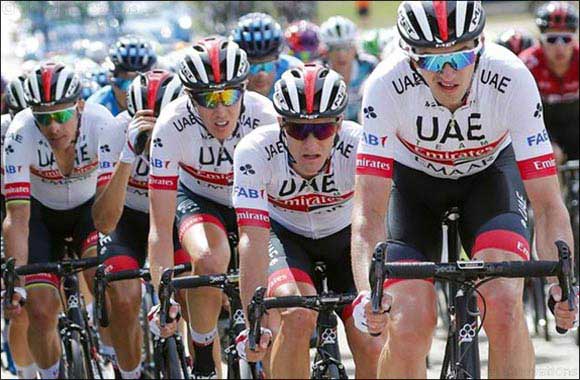 Share Home >> Entertainment
Dubai, United Arab Emirates -  18, August 2019:   The week long Vuelta a Burgos proved to be a positive stage race for UAE Team Emirates, after it was animated by a series of strong individual and team performances.
Former World Champion, Rui Costa, ended the race with a respectable 10th spot in an overall classification that was full of highly rated riders. It followed his second place finish in the fifth stage of the race, which saw him break free from the lead riders with 1.6kms to go on a brutal summit finish.
Costa managed to gain a gap of 10 seconds on the group, but the margin was not big enough to hold off Ivan Sosa (Team Ineos) who bridged across on the hardest part of the climb to take the win.
The day before, Costa was third in the stage, just behind his team mate Alexander Riabushenko who claimed the second spot. Alex Aranburu (Caja Rural- Seguros RGA) took the win. Costa narrowly missed out on the podium in the first stage too – taking fourth place behind Giacomo Nizzolo (Dimension Data), Alex Aranburu (Caja Rural) and Michael Grosu (Delko Marseille).
Costa reflected: 'I went very close to winning, but Sosa was very strong and he managed to push on in the hardest part. Practically every day I tried to make the best of my good condition to take a result, and as a team we worked well, unfortunately there was someone there to beat us every time. Now I have a few weeks to prepare for the Canadian classics with the Quebec GP and the Montreal GP'.