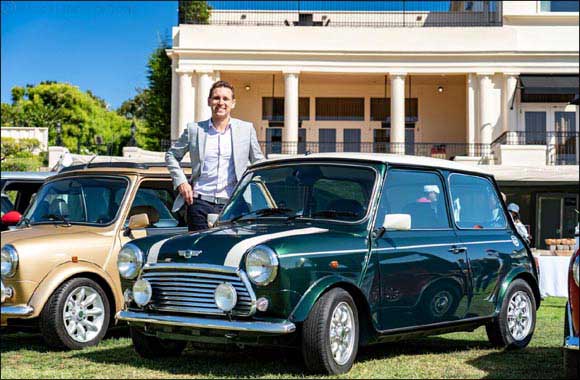 Dubai, United Arab Emirates -  20, August 2019:    Anniversary mood under California’s sun. At the Monterey Car Week 2019 and the Pebble Beach Concours d’Elegance, MINI celebrated the brand’s 60th birthday with a review of its history and an outlook on the future. On America’s west coast, MINI presented a series of historically important vehicles and provided an initial look at two fascinating new models: the brand’s most powerful series vehicle ever produced and the first all-electric powered MINI.

The new MINI John Cooper Works GP is currently undergoing the final phase of its series development process with high-speed laps on numerous racing tracks throughout the world, before being launched on the market in an edition limited to 3 000 cars during the coming year. The new MINI Cooper SE (fuel consumption combined 0.0 l/100 km; electricity consumption combined: 16.8 – 14.8 kWh/100 km; CO2 emissions combined: 0 g/km) is anticipated with high degree of tension. Production launch is already scheduled for November 2019. Taken together, the two models represent the future bandwidth of the model range for the British premium brand – from local zero-emission mobility in city traffic, to thrilling performance on the race track.

The prototype of the new MINI John Cooper Works GP already gives an inkling of the outstanding high-performance characteristics in Pebble Beach with its yawning air scoops, large alloy wheels, an independent design for the front and rear aprons and a striking roof spoiler.

The impressive appearance is certainly not overstated. During test drives on the Nürburgring, the new extreme sports car in the MINI model range went around the legendary North Loop in less than eight minutes. This feat is powered by a four-cylinder engine packing more than 220 kW/300 hp with MINI TwinPower Turbo technology under the bonnet. The new engine, the chassis technology developed with motor-sport know-how from John Cooper Works and the aerodynamically optimised body meld together to form a precisely tuned overall package for the exuberant race feeling.

The MINI Cooper SE is significantly more understated than the new elite athlete but it presents an inimitable character. Subtle accents of colour in yellow, the shrouded hexagonal radiator grille, the absence of an exhaust system and lightweight alloy wheels tailored to the model highlight the sustainable drive concept of the electric vehicle based on the MINI 3-door concept. Driving fun in the MINI Cooper SE is typical of MINI and yet fascinatingly new.

The spontaneous development of power generated by its 135 kW/184 hp electric motor, a chassis tuned specifically for the model and the particularly low centre of gravity due to the high-voltage battery positioned in the vehicle floor give the vehicle exceptional agility and dynamic performance when cornering. In future, this means that electromobility can be experienced in the inimitable style of MINI.

When the two new vehicles were presented in Pebble Beach, they were supported by a cast of exceptional representatives from the 60-year history of the brand. Alongside a Mini Cooper S from 1965 in contemporary rally trim and two special editions from the final production year of the classic Mini, the first-generation MINI John Cooper Works and the MINI E were also on display. The MINI E produced ten years ago in a small series already yielded important findings about the operation of electric vehicles in everyday situations. The experience gained in testing across the world was subsequently channelled into development of the electrically powered models of the BMW Group.

The values of fuel consumption, CO2 emissions and electricity consumption shown were determined according to the test procedure defined in the European Directive VO (EU) 2007/715 in the version applicable at the time of type approval. The figures refer to a vehicle with basic configuration in Germany and the range shown takes account of optional equipment and the different size of wheels and tyres available on the selected model. These factors can change during the configuration.

The values of some vehicles are measured according to the new WLTP (Worldwide Harmonised Light-Duty Vehicles Test Procedure) and converted to NEDC (New European Driving Cycle) for comparison purposes. The taxes or other duties for these vehicles may be based on fuel consumption and CO2 emissions data which differ from that shown here.