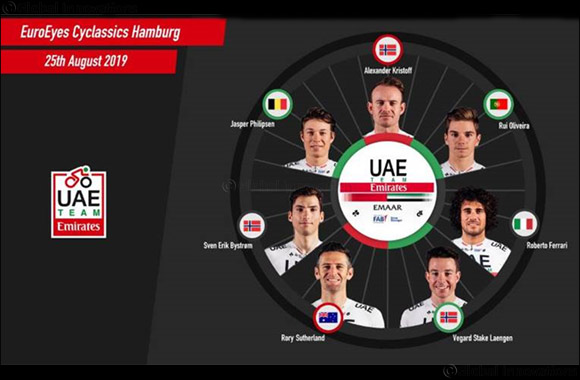 Share Home >> Entertainment
Dubai, United Arab Emirates -  22, August 2019:    UAE Team Emirates has a double bill of racing in Germany next week, starting with one-day WorldTour race, the EuroEyes Cyclassics Hamburg (25 August), which is swiftly followed by a four day race around the country, the Deutchland Tour (29 August – 1 September).
Hamburg is one for the Sprinters and the seven man squad will ride in support of Alexander Kristoff, who has not only won the race, but been on the podium a further three times. They will be guided by Sports Directors  Allan Peiper and Neil Stephens:
– Sven Erik Bystrøm (Nor)
– Roberto Ferrari (Ita)
– Alexander Kristoff (Nor)
– Vegard Stake Laengen (Nor)
– Rui Oliveira (Por)
– Jasper Philipsen (Bel)
– Rory Sutherland (Aus)
Pieper said:  “We will be at the start of the race focusing on Alexander Kristoff.. The team has been put together to give him adequate support and to be at the heart of the action during the race and in the final“.
The Deutschland Tour will see the Emirati outfit opt for a mix of climbers and fast men, under the guidance of Simone Pedrazzini  and Bruno Vicino:
– Simone Consonni (Ita)
– Alexander Kristoff (Nor)
– Vegard Stake Laengen (Nor)
– Daniel Martin (Irl)
– Aleksandr Riabushenko (Blr)
– Diego Ulissi (Ita)
“With Kristoff we will try to be up in the mix in the sprints on stages three and four– explained Pedrazzini – Martin and Ulissi will aim for the general classification, with Consonni, Laengen and Riabushenko working in support“