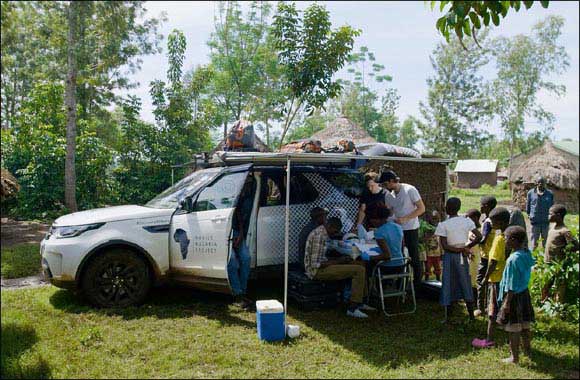 Share Home >> Automobile
● All-terrain laboratory: Land Rover Bursary team uses modified Discovery to show how in-the-field genetic analysis could help fight malaria
● Mobile first: Oxford University researchers with African partners extracted and sequenced DNA in remote locations to show how portable tech could fight spread of the disease
● One-off: Bespoke model from Land Rover Special Vehicle Operations celebrates 30 years of Discovery as the world’s most versatile full-sized premium SUV
● Long-term partners: Annual Land Rover Bursary awarded in association with the Royal Geographical Society (with IBG) ¬– Land Rover’s longest-standing humanitarian and conservation partner
● Next bursary winners announced: All women team awarded 2019 Land Rover Bursary to investigate how small-scale farmers in East Africa fight fall armyworm, a new rapidly spreading pest
● 2020 Land Rover Bursary: Applications for the 2020 Bursary, supported by the new Land Rover Defender, open 1 September 2019.
22 August 2019, Dubai, United Arab Emirates: The Land Rover Discovery has celebrated its 30th anniversary by playing the role of mobile laboratory on a pioneering drive across sub-Saharan Africa as part of the latest Land Rover Bursary.
The Mobile Malaria Project team crossed four countries in a specially converted version of Land Rover’s most versatile full-sized SUV. They successfully tested the latest portable genetic sequencing technology in remote off-grid locations for the first time – even generating data for their partners while driving.
Driving a Discovery developed by Land Rover Special Vehicle Operations and led by Dr George Busby, the team worked with local scientists to extract and analyse DNA in remote locations, generating useful genetic data within hours. Scientists usually have to wait weeks for data after obtaining, preparing and dispatching samples to overseas laboratories for analysis.
The 2018 Land Rover Bursary, awarded in partnership with the Royal Geographical Society (with IBG), supported the team of three Oxford University researchers on a 7,350km (4,567 mile) trip across Namibia, Zambia, Tanzania and Kenya.
Dr Steve Iley, Jaguar Land Rover’s Chief Medical Officer, said: “Malaria affects millions of people all over the world every year. At Jaguar Land Rover we’re passionate about using our technology to help experts in their field make a real difference and the Land Rover Bursary is a great example of this. We’re really proud the unique Discovery developed by our Special Vehicle Operations team has helped prove that remote DNA sequencing is possible even in hard-to-reach locations.”
The one-off Discovery was equipped as a mobile genetic sequencing laboratory, making full-use of its 1,137-litre load space with a fridge/freezer to safely store scientific supplies, a bespoke load space configuration system to hold the team’s equipment and an on-board expedition battery. A purpose-built dual sun awning, rescue kit, winch, sand/mud tracks, roof rack and LED night driving lamps completed the list of modifications. In addition, the scientific legwork was done by a series of compact genetic sequencing machines, MinIONs.
Project leader Dr George Busby, said: “The Discovery was the perfect tool for the job. It took the different terrains in its stride and carried all our kit with ease and performed as a mobile laboratory. Without the support of the Land Rover Bursary we simply wouldn’t have been able to make this important step of proving the viability of remote DNA sequencing in the field of malaria prevention.”
Malaria is the third-biggest killing infectious disease in the world and 90 per cent of cases occur in Africa. The distribution of drug resistance in the parasites that cause malaria and insecticide resistance in the mosquitoes that transmit it, varies across the continent, and genetic analysis is one way of providing important information on where resistance lies for local control programmes. Identifying and understanding the most effective insecticides against local mosquito populations, and the most successful treatments against the parasites they carry, are crucial for future efforts to control the spread of malaria.
During the two-month trip, the team demonstrated it is possible to train people to use technology and to generate information about the amount of resistance in a population from genetic data using only the equipment carried with them in the Discovery – proving the value of regional sequencing and that such processes are no longer restricted to large centralised laboratories.
Fresh from this success, Land Rover has announced the winners of the 2019 bursary, an all women team, who will travel through remote rural East Africa with the aid of a bespoke Discovery. They will gather evidence on the factors influencing farmers’ adoption of pest management technologies, focusing on fall armyworm, a highly destructive pest threatening food security.
In addition, applications for the 2020 Land Rover Bursary – which will be the first to use the new Defender will open on 1 September. The closing date for entries is 30 November 2019