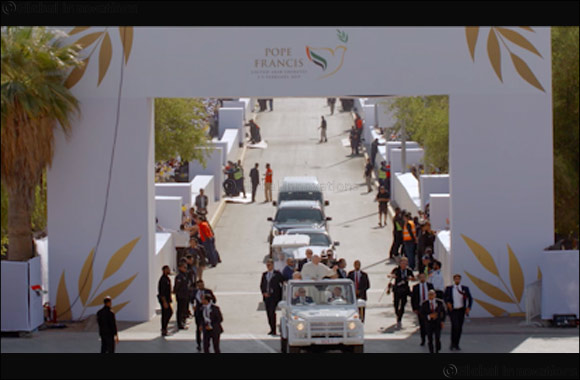 Share Home >> Entertainment
• The captivating 22-minute Arabic documentary ‘The Peace Visit’ captures the Pope’s first visit to the region in February 2019
• Premieres on September 5 at 8pm UAE Time/ 7pm KSA time
Abu Dhabi, September 4 2019:  National Geographic Abu Dhabi, a partnership between National Geographic and Abu Dhabi Media, announced today its latest documentary titled ‘The Peace Visit’ highlighting Pope Francis’ three-day historic visit to Abu Dhabi in February 2019, as part of the UAE’s Year of Tolerance.
The documentary, which premieres on September 5, 2019, at 8pm UAE time and 7pm KSA time, serves as a journal of the Pope’s first-ever visit to the Gulf region. It chronicles the trip, over three parts, highlighting the extraordinary events and groundbreaking meetings that took place. It also features interviews with local citizens and government representatives on the visit and its significance to the UAE, a country well-known for its tolerance for all.
The first part of the documentary shows early contacts between the UAE and the Holy See, up until the Pope’s acceptance of His Highness Sheikh Mohammed bin Zayed Al Nahyan, Crown Prince of Abu Dhabi and Deputy Supreme Commander of the UAE Armed Forces’ invitation to visit the UAE.
The second part focuses exclusively on Pope Francis’ visit to Abu Dhabi, where he met with the Grand Imam of Al Azhar and Chairman of the Muslim Council of Elders Dr. Ahmed El Tayeb, and which led to the signing of a Human Fraternity Document, calling on people to unite to bring about inter-faith harmony and tolerance.
The final part of the documentary captures the Papal Mass delivered at the Zayed Sports City stadium, in front of more than 100,000 attendees from around the world, where*/78- the Pope asked everyone to pray that the seeds sown may bear fruits of peace in the future.