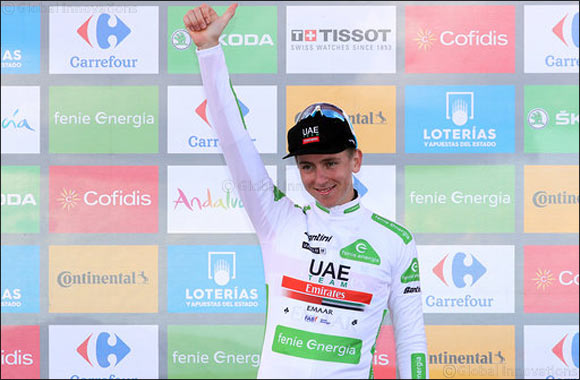 Share Home >> Entertainment
Dubai, United Arab Emirates -  September 07, 2019:   UAE Team Emirates’ Tadej Pogacar put on another display of sheer brilliance during stage 13 of La Vuelta, and in doing so took his second stage win in just five days. The unbelievable result also launched the 20-year-old star into third place in the overall classification and into the white ‘Youth Classification’ jersey.
The day didn’t start out well for the Emirati formation, with news that Fabio Aru would retire from La Vuelta after experiencing muscular damage in his leg that was worsening as the race went on. However, all that was forgotten as the stage reached the business end and a select group of 29 GC riders hit the bottom of Las Machucos – the seventh categorized climb of the afternoon. With 6.5km of constant climbing - and sections featuring brutal gradients in excess of 25% - it was always going to be a true test of the strongest riders in the bunch.
With 6kms to go Nairo Quintana was the first of the GC contenders to attack, as he closed the gap on Pierre Latour (AG2R La Mondiale) who had attempted to solo away a few kilometres earlier. However Pogacar, and his Slovenian rival Primoz Roglic (Jumbo Visma), proved too strong for everyone as they accelerated away from the bunch and reeled in both Quintana and Latour with less than 2kms to go. With the finish line in touching distance Pogacar managed to find another gear, riding Roglic off his wheel and crossing the line first to take his 7th win and UAE Team Emirates’ 24th win of the season.
Pogacar now sits just over three minutes behind the race leader Roglic and 46” off a second place spot, behind World Champion Alejandro Valverde (Movistar). He also leads Miguel Angel Lopez by 17” at the top of the Youth Classification.
On his current form Pogacar said: 'At the start I didn't know I would feel so good on the last climb. In fact, I just wanted to survive because after stage 7, my goal was simply to not lose too much time. But in the end it was an incredible day for me. When I heard over the radio that nobody was following me and Roglic, I realised that it was a good opportunity to go for the stage. And with Roglic it's always difficult to go against him because he's really strong. I could do that today and I'm really, really happy.'
Stage 13 Results:
1. Tadej Pogacar (Slo) UAE Team Emirates 4:28:26
2. Primoz Roglic (Slo) Jumbo Visma st
3. Pierre Latour (Fra) AG2R La Mondiale +0:27
GC Standings after Stage 13:
1. Primoz Roglic (Slo) Jumbo Visma 40:29:28
2. Alejandro Valverde (Spa) Movistar +2:25”
3. Tadej Pogacar (Slo) UAE Team Emirates +3:01”