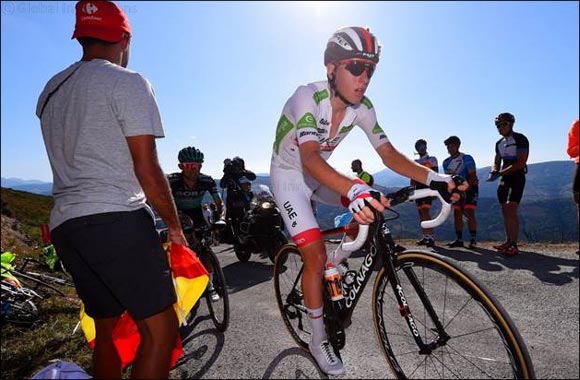 Share Home >> Entertainment
UAE Team Emirates’ Tadej Pogacar moved another step closer to taking a podium finish at his first ever Grand Tour, after matching his main GC and Youth Classification rival, Miguel Angel Lopez (Team Astana), pedal stroke for pedal stroke during stage 15 of the Vuelta a Espana.
Dubai, United Arab Emirates -  September 09, 2019:   It was a stage that saw the breakaway riders have their day, with Sepp Kuss (Jumbo Visma) crossing the line first after battling 154.4kms of mountainous terrain from Tieno to Santuario del Acebo. The race came to life for the GC contenders on the final climb of the day, with a select group of riders fracturing as the gradients got tougher. Pogacar rode the perfect race, letting Alejandro Valverde (Movistar) and Primoz Roglic (Jumbo Visma) ride away with 7km to go as they went head to head for first and second place in the GC. Meanwhile, Pogacar calmly marked his man Lopez, responding to each acceleration and ensuring no time gaps were opened up. The intelligent and measured performance allowed the 20-year-old Slovenian to retain third place in the overall classification - 17 seconds ahead of Lopez - and take the white ‘young riders’ jersey into stage 16.
Pogacar commented: “It was another really fast day and the start was hard too. Towards the end it was getting hotter and hotter and we still went full gas on the last climb, so I am really happy that I could hold on to third place in the overall and the white jersey. He continued: When Valverde attacked, I was a little tired, but also I didn’t want to waste more energy by accelerating so early on the climb. Instead I decided it was best to follow Lopez as he is still the closest to me in the GC”.
Stage 16 will be another tough race for the GC riders as they take on a 144.4km mountain course from Pravia to Alto de la Cubilla Luba. The stage features three climbs en route and ends with yet another summit finish, 1690m above sea level.
Stage 15 results:
1. Sepp Kuss (USA) Jumbo Visma 4:19:04
2. Ruben Guerreiro (Por) Katusha Alpecin +0:39”
3. Tao Geoghegan Hart (GBr) Ineos +0:40”
12. Tadej Pogacar (Slo) UAE Team Emirates +2:55”
General Classification after stage 15:
1. Primoz Roglic (Slo) Jumbo Visma 58:10:32”
2. Alejandro Valverde (Spa) Movistar +2:25”
3. Tadej Pogacar (Slo) UAE Team Emirates +3:42”