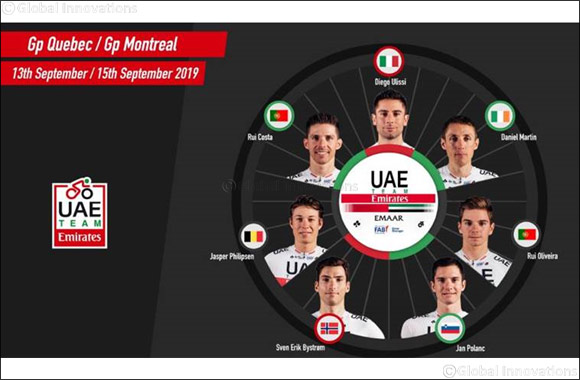 Share Home >> Entertainment
Dubai, United Arab Emirates -  September 09, 2019:  UAE Team Emirates’ Diego Ulissi will be looking to replicate his 2017 win at the GP Montreal, as he leads a seven man squad to North America for a double bill of racing in the French Quarter of Canada. The team will take on both the 201.6km Grand Prix Cycliste de Quebec (13 September) and the 219.6km Grand Prix Cycliste de Montreal (15 September), two challenging WorldTour races that are played out on street circuits around the respective host cities.
The team will be guided by Sports Director Neil Stephens:
– Diego Ulissi (Ita)
– Sven Erik Bystrøm (Nor)
– Rui Costa (Por)
– Daniel Martin (Ire)
– Rui Oliveira (Por)
– Jasper Philipsen (Bel)
– Jan Polan (Slo)
Ulissi said: 'I have special memories of these races in Canada. I won in the past in Montreal, and it's a race that you need to be switched on for from start to finish. For the 2019 edition, the organisers have decided to add two laps of the race circuit, bringing the total count to 18 climbs which will therefore make it even more important to arrive in Canada with a good condition and be present as a team with as many riders as possible in the final. The goal is to do well in these races and bring forward the condition from the Deutschland Tour.'