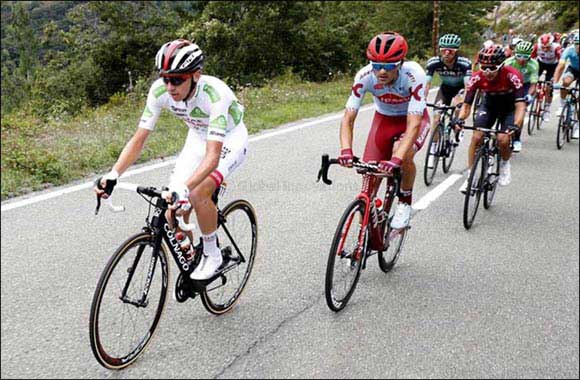 Share Home >> Entertainment
Dubai, United Arab Emirates -  September 11, 2019:  UAE Team Emirates’ Tadej Pogacar continued his unbelievable run of form at Stage 16 of this year’s Vuelta a Espana, by digging deep on the final climb of the day to help drop Alejandro Valverde (Movistar). Valverde currently sits above Pogacar in second place in the General Classification with a lead that has now been reduced to 54 seconds.
The stage from Pravia to Alto de la Cubilla Lena featured three classified climbs and the action for the GC men was reserved for the last one. As the breakaway men contested the stage victory, which was eventually taken by Jakob Fuglsang (Astana), the GC riders eyed each other up on the 17.8km climb that led to another summit finish. With 4kms to go Miguel Angel Lopez (Astana) attacked the group in an attempt to distance Pogacar, who leads him in both the overall and youth classification. However the young Slovenian was able to match Lopez’s accelerations – as was the race leader Primoz Roglic (Jumbo Visma). The three riders eventually worked as a unit and crossed the line together to put time into Valverde and the rest of their GC rivals.
Pogacar remains in third place in the GC, but has closed the gap on second place by 23 seconds. He also remains in the white youth classification jersey ahead of the final rest day of the tour.
Pogacar commented: “Today was a tough day, above all in the finale when Lopez attacked me several times. I gave everything I had to follow him and it went well at the end. It will be a really exciting duel until the last day. Today was also a good day because I gained some time on Valverde, and also maintained my advantage on Lopez. I’m tired, I think like everyone, in the morning and after the stage, but I continue to feel good during the race. I hope to be at the top in the last week too.”
After the rest day the race heads from Aranda de Duero to Guadalajara for a 219.6km flat stage, which is likely to end in a bunch sprint finish.
Stage 16 results:
1. Jakob Fuglsang (Den) Astana Pro Team 4:19:04
2. Tao Geoghegan Hart (GBr) Ineos +0:22”
3. Luis Leon Sanchez (Spa) Astana +0:40”
14. Tadej Pogacar (Slo) UAE Team Emirates +5:58”
General Classification after stage 16:
1. Primoz Roglic (Slo) Jumbo Visma 62:17:52”
2. Alejandro Valverde (Spa) Movistar +2:48”
3. Tadej Pogacar (Slo) UAE Team Emirates +3:42”