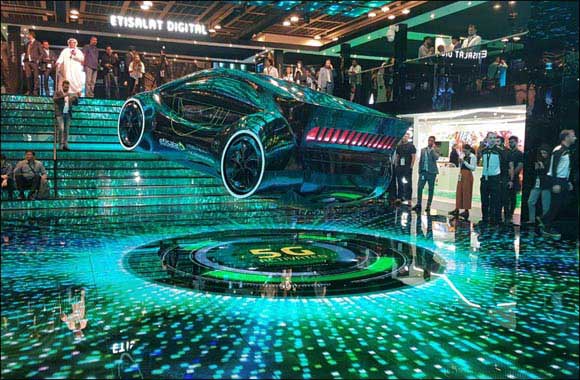 GITEX Technology Week & GITEX Future Stars 2019 will feature the region’s largest 5G tech applications, new Lifestyle Tech and Future Mobility developments, as well as offering a glimpse into the ways that Artificial Intelligence and Gen Z will shape the future

Dubai, UAE – 14th September 2019:   Globally renowned technology events GITEX Technology Week and GITEX Future Stars are set to wow over 100,000 tech enthusiasts and business leaders with the ways its global participants from 140 countries are harnessing and synergising the mind and technology economy.

GITEX will define the innovative ways that advanced transportation systems, cutting-edge devices and a new generation obsessed with technology will reshape the world.

With Middle East and North Africa IT spending expected to reach $160 billion in 2019[1], the 39th edition of GITEX Technology Week and the 4th edition of GITEX Future Stars are set to feature all-new sections on Lifestyle Tech and Future Mobility – trends which will embody a world of ubiquitous devices and driverless, next-generation transport.

Across its 1.4 million square foot venue, GITEX Technology Week will welcome over 4,800 exhibitors from over 140 countries, and host 290 hours of content over five days, while GITEX Future Stars, the leading event for tomorrow’s brightest technological minds, will feature over 750 international startups and corporate accelerators, and more than 1,500 investors and corporate buyers.

Heavyweight visionaries making their debuts at one of the world’s definitive technology events this year include China Mobile, Ericsson, Honeywell, Nokia, Schneider Electric and Siemens, who will unpack developments around the  world’s most transformative and emerging technologies including 5G, blockchain and AI.

Artificial Intelligence is set to be the nucleus behind all emerging technology, and will transform everything from government services, manufacturing and service industries, to every business that relies on customer interaction. AI is expected to contribute almost 14% of the UAE’s GDP by 2030, equivalent to $96 billion[2], and in preparation for this monumental shift, GITEX will unite AI global tech powerhouses to show how the world will be redefined by self-driving vehicles, intelligent robots and the world’s smartest and most effective cybersecurity solutions.

The GITEX Artificial Intelligence Zone will unleash five incredible days of non-stop free learning sessions, 10 Hours of INSEAD-powered AI Workshops and will cover the paradigm-shifting ways that AI is affecting agriculture, construction, procurement, marketing, factory automation and government. The UAE has already set a marker down to be a world leader in AI, appointing the world’s first Minister of State for Artificial Intelligence and launching the UAE Artificial Intelligence Strategy 2031, developments that already show the monumental impact that AI is having on the national economy.

World-leading AI expert and GITEX keynote speaker Dr Ben Goertzel, Chairman and Chief Scientist of Singularity Studio, and CEO and Founder of SingularityNET Foundation, will reveal how AI will merge with blockchain to create deep value for businesses and society, increase human life expectancy and support medical research. Dr Goertzel is well-known in the technology world as the former chief scientist of Hanson Robotics, creator of social humanoid robot Sophia.

Lifestyle Tech: the generation of devices

Device sales are expected to reach US$26.9 billion in the Middle East and North Africa in 2019[3], and GITEX’s new Lifestyle Tech segment will feature sneak peeks at products from the world’s biggest tech companies that are yet to be launched in the UAE, from cutting-edge smartphones, smart home appliances and surveillance cameras, to home entertainment and a diverse range of mobile electronics.

GITEX Lifestyle Tech will serve as the intersection between 21st Century innovation and a healthier life, with 225 million wearable devices expected to be shipped in 2019[4]. In the Middle East alone, the smart home technology market is expected to reach $1.86 billion by 2022, while the consumer electronics market in the UAE will climb 6% to reach nearly $3.8 billion this year.

Samsung will provide game-changing insights into the smart home of the future. GITEX visitors will get the chance to get a first look at Samsung’s newest mobile devices including the Galaxy Note 10 5G and Galaxy Fold, as well as Samsung’s groundbreaking advancements in 5G connectivity, which the company has been bringing to life over the past decade.

Nearly a decade in the making, 5G is finally becoming a reality and is set to transform the Middle East’s economy. It represents a major breakthrough that will change the way that devices connect to the internet, and to each other. GITEX’s 5G Countdown conference agenda will explore how 5G will revolutionise Industry 4.0, smart cities and autonomous vehicles, as well as getting to the bottom of 5G security concerns.

The Middle East and Africa region is set to be at the centre of the 5G revolution, with 30 million 5G mobile subscriptions expected in the region by 2024[5], and all six GCC countries expected to launch 5G mobile services in the next two years, with the UAE aiming to deploy 5G by 2020. GITEX will parade 5G’s most global and prominent names including China Mobile, Cisco, du, Etisalat, Nokia and STC in what will represent a dazzling glimpse into the wireless, interconnected future.

A star-studded 5G Countdown conference agenda will feature Osman Sultan, CEO, du, who will focus on the transition to and life-changing potential of 5G; Fadi Pharaon, Senior Vice President and Head of Market Area, Middle East and Africa, Ericsson, who will home in on meeting operator demands; and Dr Mohamed Madkour, VP, Global Wireless Networks Marketing and Solutions, Huawei, who will discuss how to create the future of manufacturing through 5G, IoT and AI.

“GITEX 2019 is about showing tomorrow, today. The UAE is amongst the first countries in the world to launch 5G. This year at GITEX we will launch our 5G services,” Osman Sultan, CEO, du, said.

GITEX will also host a panel discussion on the ways that 5G and IoT will be at the core of powering intelligent industry and manufacturing, featuring Dritan Kaleshi, Head of Technology (5G), Digital Catapult; Jan Rabe, CEO, Consulting, Siemens and Mario Meir-Huber, Head of Big Data, Analytics and AI CoE, A1 Telekom Austria.

GITEX’s conference tracks are set to feature over 290 hours of content - 90 hours of which are free-to-attend – and will cover transformational topics including Future Mobility, NXG (Next Generation) and the 5G Countdown. GITEX will also get to the crux of the most business-critical technology issues impacting industries and disciplines including Digital Marketing, Education, Energy, FinTech, Healthcare and Retail.

Amy Golding, Chief Executive Officer of Opus Talent Solutions, who has also been hailed as the youngest female CEO of a $100 million company in the UK, will discuss her experience on how to bridge the digital skills gap.

GITEX Future Stars will spotlight the transformative impact of generation Z with the introduction of its NXG Stage. The latest generation of digital natives, Gen Z are at the forefront of the digital economy, with a buying power of $44 billion. With 60% of the MENA region population under the age of 25, GITEX will provide a platform for the future’s technology leaders, developers and consumers on the dedicated Gen Z stage.

Featuring some of the most influential and successful members of Gen Z in the world - including Akshay Ruparella, the 19-year-old founder and MD of Doorsteps.co.uk, and Benjamin Stern, creator of a waste-free shampoo tablet in his teens, securing investment on hit US TV show Shark Tank – the Gen Z stage promises to show visitors how to cater to a tech-obsessed generation.

GITEX Future Stars will also see The Government of Abu Dhabi looking to make its mark on the event, with the Emirate’s hottest innovation prospects, including Hub71, Abu Dhabi Global Market (ADGM), Start AD, Krypto Labs, Department of Health Abu Dhabi, all aiming to put Abu Dhabi on the map as the innovation hub of the future. Abu Dhabi has pledged AED 535 million into Hub71, a new initiative supported by Mubadala Investment Company, Microsoft, SoftBank Vision Fund and Abu Dhabi Global Market (ADGM), to attract startups to set up shop in the UAE capital.

GITEX Future Stars will give startups the chance to pitch their ideas against one another across a packed agenda of competitions. The GITEX Future Stars Supernova Challenge will be spread across 11 categories, including the NXG category, awarding the latest innovation from a Gen Z startup. The Supernova Champion will take home US$ 100,000, with each sub-category featuring a $10,000 prize. There will also be innovation competitions from the Department of Tourism and Commerce Marketing in partnership with Accenture, and Department of Health Abu Dhabi.

After a pre-selection process in Paris, London, Milan and Moscow to find the most innovative tech ventures, Chalhoub Group’s The Greenhouse retail tech startup challenge will see startups compete at GITEX Future Stars to win the title of the best creative economy startup.

“GITEX Technology Week is an international confluence of the greatest minds in technology, global business leaders in the industry and rising stars from the tech ecosystem. GITEX Future Stars has already built a reputation as the definitive platform in the Middle East and North Africa for startup content, and this year will spotlight just how Gen Z will define our future,” said Trixie LohMirmand, Senior Vice President, Events and Exhibitions, Dubai World Trade Centre.

Held under the theme ‘Synergising the Mind and Technology Economy’, the 39th annual GITEX Technology Week and GITEX Future Stars will be hosted at Dubai World Trade Centre from 6-10 October 2019 and is set to host over 100,000 visitors from across the technology ecosystem. GITEX will focus on ways to optimise the immense potential in the relationship between next-generation technology and the power of human thought and creativity for augmented societal good, in an increasingly connected and digitised world.