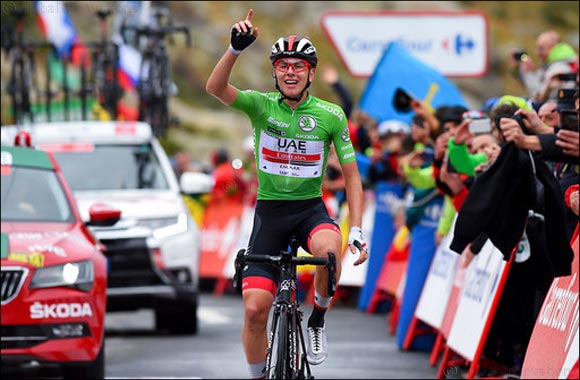 Share Home >> Entertainment
Dubai, United Arab Emirates -  September 15, 2019:   UAE Team Emirates’ king of the climbs, Tadej Pogacar, blew away the competition in the mountains today to take his third stage win at La Vuelta and in doing so not only secured a place on the podium in Madrid, but claimed the coveted white jersey as the best young rider in the race.
Pogacar went into stage 20 in 5th position in the GC and needed to do something special to move up the rankings. With 38kms to go, as the main contenders rode the penultimate climb of the day, the 20-year-old Slovenian did just that – attacking with such ferocity that none of his rivals could respond. It was a courageous move by the youngest rider in the race, and it paid dividends, as he soloed away to the line in what will go down in the history books as a masterclass in Grand Tour bike racing.
On his unbelievable win Pogacar said: “I started the race with good legs, but didn’t feel as good mentally. But then I began to notice that everyone else was struggling in the cold and rain and I started to feel better. When we had about 5kms left of the penultimate climb, I knew there was a head wind, so I wasn’t initially sure if I should go. But after watching lots of other failed attacks I could tell my rivals weren’t feeling that good. I put in a strong acceleration and no one could follow, then I was able to go full gas and maintain my lead until the finish line. I never imagined I would be in this position three weeks ago. It feels incredible.”
The win, which came after more than five hours in the saddle from Arenas de San Pedro to Plataforma de Gredos, is Pogacar’s 8th victory this season and takes UAE Team Emirates’ tally to 26 - the most the Emirati formation has achieved since its inception in 2017. Pogacar also became one of only three riders under the age of 21 to ever take a hattrick of stages in one Grand Tour, one of the others being Giuseppe Saronni who currently works with UAE Team Emirates as an advisor.
Tomorrow Pogacar will ride the final stage of the three week race through the streets of Madrid, a traditional procession in which the GC riders will not attack – leaving it for the sprinters to contest in the final kilometres. As long as Pogacar is able to avoid incident or injury he will find himself stood on the podium in third place behind World Champion Alejandro Valverde (Movistar) and race winner Primoz Roglic (JumboVisma). The achievement is a career defining moment for any rider, but made all the more astonishing as this is Pogacar’s first season in the WorldTour and his first ever three week race.
Stage 20 Results:
1. Tadej Pogacar (Slo) UAE Team Emirates 5:16:40”
2. Alejandro Valverde (Spa) Movistar +1:32”
3. Rafal Majka (Pol) Bora Hansgrohe st
GC Standings after Stage 20:
1. Primoz Roglic (Slo) Jumbo Visma 80:18:45”
2. Alejandro Valverde (Spa) Movistar +2:33”
3. Tadej Pogacar (Slo) UAE Team Emirates +2:55”


Enjoy a Selection of Anti-Aging Products from Beauty Solutions

How to Beat Pigmentation with DERMAdoctor

SentinelOne Unveils Singularity, The Platform to Defeat Every Attack, Every Seco ...

This Unbeatable Bundle Offer makes it the Best Time to Buy the King of 5G Smartp ...

Digital Convergence of Power Management and Process Automation to Boost Oil and ...

Triple Award: GROHE SmartControl Faucets are the New Darling in the Kitchen

Airlines and Posts Cooperate Globally for a Sustainable and Reliable Cross-borde ...

Achieve Gorgeous and Radiant Skin in Only 90 Seconds