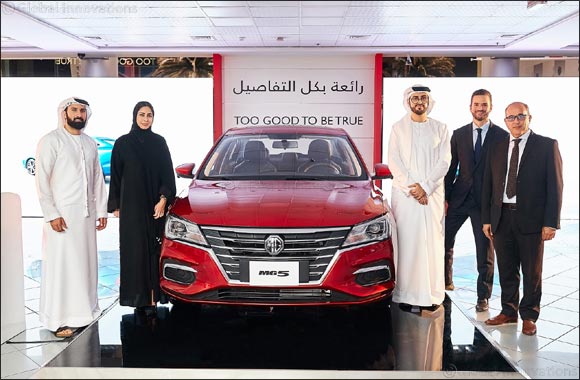 Share Home >> Automobile
• All-new MG5 compact sedan makes its debut at Al Yousuf Motors showroom on Dubai’s Sheikh Zayed Road
• All-new MG5 is the first of three new models to be launched before the end of 2019
Dubai, United Arab Emirates -  September 18, 2019:   As Al Yousuf Motors continues to celebrate its first anniversary as the exclusive UAE distributor for MG Motor, the automotive retailer hosted the UAE-debut of all-new MG5 at its Dubai showroom on Tuesday September 17th.
The new MG5 is now available across the Middle East, with prices ranging from $9,900* for the entry level model to $10,800* for the mid-range and $12,600* for the top-of-the-range trim.
True to its tagline ‘too good to be true’, the MG5 is a ‘no compromise’ alternative to the more traditional models in the market, offering new car buyers unrivaled equipment levels and the very best combination of cutting-edge technology, space and style wrapped up in a modern compact sedan package.
Mohamed Iqbal Al Yousuf, Deputy President – Marketing, Al Yousuf Motors, commented: “We have been exclusive partners with MG Motor for over a year now and we have already seen the popularity of the brand grow amongst the Emirates’ motorists. So far in 2019, we have sold MG models in record numbers, exceeding the total figure for 2018. Now with the addition of the fantastic new MG5 and a further two new models to come before the end of the year, we look forward to welcoming even more new car buyers to our showroom.”
The new MG5 has been completely re-designed from the ground-up, with a brand-new personality to appeal to MG’s young audience in the region. With its sharp, aggressive lines, the MG5 cuts an imposing silhouette, accentuated by ‘lightening blade’ LED daytime running headlights and a chrome Wingspan grille at the front and LED lights at the rear.
Offering customers all-round best-in-class specifications, the list of premium features available on the all-new MG5 includes a 10.1” touch screen with Android Auto and Apple Car Play, a 360 camera plus rear parking sensors, an electric sunroof and electric seats, all topped off by a six-year manufacturer’s warranty for ultimate peace of mind.
The MG5 comes with a dynamic yet efficient 1.5L petrol engine that delivers maximum power of 110hp at 6,000 rpm and up to 150 Nm of torque at 4,500 rpm, positioning it ahead of its key competitors. The MG5 engine management system developed by BOSCH features a Dual Cooling Cycle that increases overall engine efficiency and longevity.
The MG5 is the first of three brand-new arrivals to the MG line-up this year, with the new MG HS and MG RX8 to follow soon, as the British-born brand continues its expansion across the Middle East.