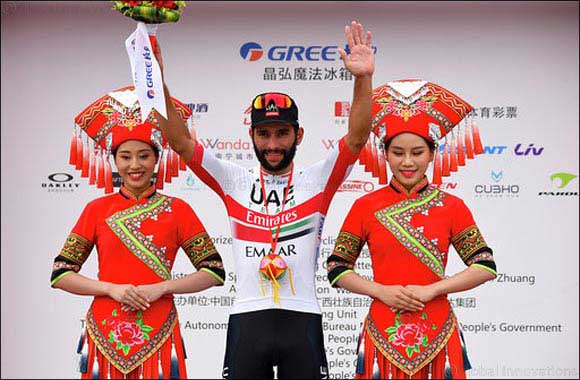 Share Home >> Entertainment
Dubai, United Arab Emirates - October 21, 2019:    UAE Team Emirates’ Fernando Gaviria earned his second stage win at the Tour of Guangxi with a well timed sprint finish, beating Pascal Ackermann (BORA-Hansgrohe) and Matteo Trentin (Mitchelton-Scott) to victory.
The longest stage of the tour from Liuzhou to Guilin, spanning over 212.2km, took riders into the hills with the second half of the race being packed with climbs. Gaviria was one of many sprinters dropped on the final climb, but his team mates worked hard to get him back up to the bunch before the race exploded into action. With 250m to go, Gaviria was the first to open up the throttle and was unstoppable all the way to the line, showing he is getting back to the form we saw before his early season injury.
Gaviria said  “I rode conservatively knowing that there were climbs to overcome. I got confidence as I was close to the front in the hills. It’s incredible to get two stage wins here after the difficult season I had. My knee problems are definitely behind me!”
There was also a top 20 finish for UAE Team Emirates’ team mate Ivo Oliveira who finished 17th.
Stage 5 Result
1. Fernando Gaviria (Col) UAE Team Emirates 5h13”42”
2. Pascal Ackermann (Ger) BORA-hansgrohe s.t.
3. Matteo Trentin (Ita) Mitchelton-Scott s.t.
General Classification after stage 5
1. Enric Mas (Deceuninck-Quick-Step): 19h04”32”
2. Danny Martinez (EF Education First): +00”05”
3. Diego Rosa (Ineos): +00”14”