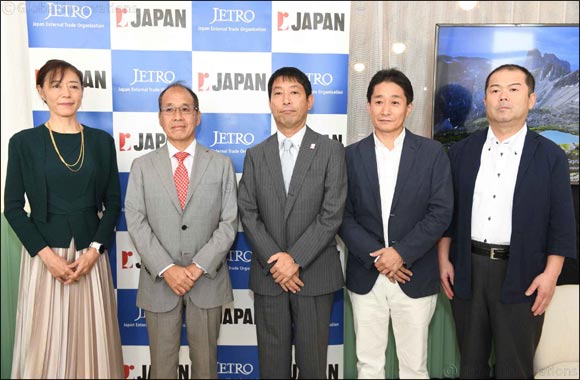 Monday, 29 October 2019:     JETRO (Japan External Trade Organization), a Japanese Government organization supported by the Ministry of Agriculture, Forestry and Fisheries of Japan addressed its will to increase the export of authentic Japanese rice and its products in the region as well as introduce Japanese rice flour for the first time in the UAE available at KOBEYa located in Wasl Vita Mall, Dubai. While Japanese rice isn’t new to the market, Japanese rice flour is bringing on a new era to the rice market and creating a new addition to the Japanese food culture exclusively for Japanese food lovers, gluten intolerants and health enthusiasts.

With over 200 Japanese restaurants in the UAE, many are not aware of the difference between authentic Japanese rice in comparison to other countries. Well renowned for its superior quality and juicy sweet fragrance, Japanese rice is also known to become fluffy and glistening. The flavor and texture are a great match for Japanese cuisine. It is also delicious even when cold, and is eaten in bento (lunchbox) and as onigiri (rice ball).

“UAE is home to over 200 nationalities and 3500 Japanese expatriates. The Gulf state is Japan’s most important trading partner in the Middle East and North African region with an overall trade valued at AED387 billion in 2018. Japan’s rice has brought abundance and health to the lives of Japanese people. It is the pride of the nation and is exported to the UAE to bring quality you can trust and a difference you can taste.” said H.E. Akima Umezawa - Consulate General of Japan in Dubai.

Only a few select top Japanese Restaurants in the UAE use Japan’s authentic rice such as Tomo, Kohantei, Hoseki and KOBEYa. While priced on a higher scale at AED 125/- for 5kgs and AED 25/- for 1kg, Japan’s rice is an exquisite creation made possible by the country’s exceptional waters and soil, its technological know-how, and the tireless effort of its growers. The discerning tastes of Japanese consumers and the diversity of its uses in cuisine have resulted in about 900 officially recognized varieties of Japanese rice.

Mr. Masami Ando, Managing Director, JETRO – Middle East said, “UAE imports approximately 1 million tonnes of all types of rice every year with the highest imports from India, Pakistan, Thailand and Vietnam. Followed by United States, Egypt and Australia. In our efforts to increase the export of Japanese rice and its products in the region, JETRO has tied up with KOBEYa, UAE’s first gluten free Japanese and Far Eastern café offering authentic Japanese rice, rice flour and confectionary retail products from Japan such as cookies, tea, snacks and much more. We have also collaborated with Middle East Fuji (Food Trading Company) to ensure effective initiatives will help increase the export of Japanese rice by 20% in 2020. We will also participate at the Gulfood from 16-20th February, 2020 to showcase different varieties of rice from Japan at the Japanese pavilion. Currently, we are also exploring other channels to expand our distribution network.”

When asked what makes authentic Japanese rice and flour stand out from the rest of the world? Ms. Kayo Fujita, Director, JETRO - JAPAN said, “Japanese rice is nutritious, low in fat and typically contains higher levels of protein and amylose, giving it a soft and springy texture that brings out the sweet taste as it is chewed. Its great at enhancing the flavors of all sorts of dishes, thanks to the quality and characteristics of Japanese rice and Japan's excellent processing technology. It also has a low oil absorption rate lower than that of wheat flour. For example, tempura fried with rice flour has a crispier texture that lasts for a long time and healthier low calories.”

Retailed at AED 49 per kg, rice flour is a particularly good substitute for wheat flour, which causes irritation in the digestive systems of those who are gluten-intolerant. Rice flour is naturally gluten-free, rich in carbohydrates and low in fat and can be used to make rice noodles, rice pasta and bake cakes, cookies, dumplings, breads as well as thicken sauces. With the increase in consumer focus on healthy foods, the consumption worldwide is expected to continue to grow until 2025. The Global Rice Flour market is expected to reach 15500 million US$ by the end of 2025, growing at a CAGR of 3.8% between 2019 and 2025.