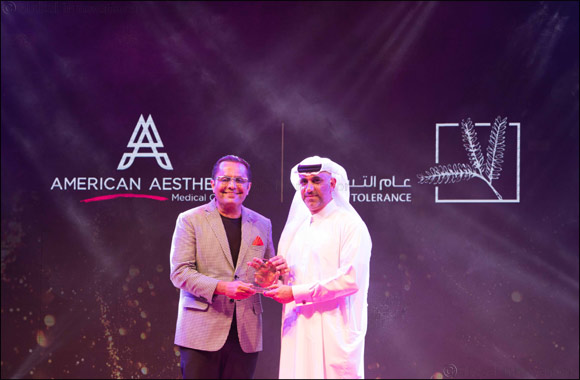 Dubai, United Arab Emirates - October 31, 2019:    American Aesthetic Medical Center, a widely acclaimed name that encompasses most advanced and innovative techniques for both surgical and non-surgical treatments like Plastic Surgery, Hair Transplant, Cosmetic Gynecology, Andrology, and Laser & Skincare, has been declared as the only center of excellence in the region for hydra facial as well as Is clinical.

This auspicious occasion became more interesting with the Super Power Awards ceremony that gave recognition to people and companies across fifteen categories. Director of Programs and Partnerships from Ministry of Tolerance, H.E. Yasser Al Gargawi and Dr Sana Sajan, Director of American Aesthetic Medical Center along with other senior management of the company graced the occasion with their presence.

American Aesthetic now stand as the only undisputed center of excellence in the region for hydra facial with there being mere six such centers including New York, Los Angeles, Milan, Shanghai  and Tokyo around the world that has received this honor. To top it off, yet another medical aesthetic giant, Is Clinical, whose products tend to be the most prevalent choice of Hollywood celebrities, shared their intention by recognizing the clinic their center of excellence as well. Both of the companies extended their support in giving the awards mentioned below.

“We are bringing something novel and original of top-level to Dubai, taking into account that Dubai is seemingly the center of the world nowadays”, said Sana Sajan, Director of American Aesthetic Medical Center.

“I would like to reiterate  that we are the center of excellence for hydra facial and our clinic  has been officially affiliated to it as its training hub for its officials about the new procedures and products “, she further added.

“We ventured into the healthcare industry because our group being a conglomerate has noticed that this industry has been growing and the demand for products and services in healthcare will always be on upward trend as long as humankind exists. We are already witnessing a very good return on investment made on this medical Centre “said Rizwan Sajan, Chairman and founder of Danube Group and American Aesthetic Medical Center.

“Ceremonies like these celebrating the achievements of people living in the UAE are a paradigm of spirit of the year of tolerance. I would like to thank this medical Centre for celebrating this year in this way. “said H.E. Yasser Al Gargawi, Director of Programs and Partnerships from Ministry of Tolerance.