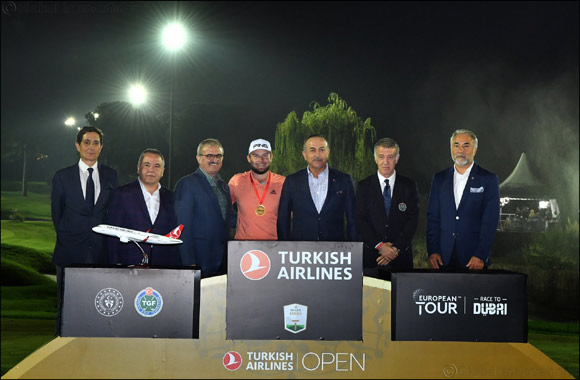 Share Home >> Travel & Tourism
Englishman Tyrrell Hatton won the 2019 Turkish Airlines Open, securing victory on the fourth hole of a record-equalling six-man play-off that took place under floodlights for the first time in professional golf at the Montgomerie Maxx Royal in Antalya, Turkey.
Joining winner Hatton at the Turkish Airlines Open award ceremony was the Minister of Foreign Affairs, Mr. Mevlüt Çavuşoğlu, the Governor of Antalya, Mr. Münir Karaloğlu, the President of Turkey Golf Federation, Mr. Ahmet Ağaoğlu, the Mayor of Antalya Metropolitan Municapility, Mr. Muhittin Böcek, and the Turkish Airlines Open Tournament Director, Mr. Miguel Viador.
Austrian Matthias Schwab took a three-shot lead into the final round but could only shoot 70 and was joined at -20 by American Kurt Kitayama, South African Erik van Rooyen, Hatton and Frenchmen Benjamin Hebert and Victor Perez - only the third time in European Tour history that there has been six-man play-off.
Commenting on the finals Turkish Airlines Chairman of the Board and the Executive Committee, Mr. M. İlker Aycı said; “On behalf of Turkish Airlines, I would like to offer congratulations to Tyrrell Hatton, winner of the 2019 Turkish Airlines Open. Once again, we had a hugely-talented field here in Antalya and Tyrrell’s performance this week made him a worthy winner in a historic play-off under floodlights.
The Turkish Airlines Open, which has become one of the most important tournaments in world golf, continues to grow and grow in every passing year.”
Kitayama, Hatton and Schwab made birdies to move on to the second play-off hole, while Van Rooyen, Hebert, and Perez were eliminated.
All three missed birdie putts on the second play-off hole and the floodlights came on for the third attempt. This time Kitayama missed his birdie putt and dropped out to leave just Schwab and Hatton in the tournament.
Hatton made par on the fourth play-off hole to earn him his fourth European Tour victory.
Golf is key to Turkish Airlines’ promotion of sport and culture and the airline, which flies to more countries and international destinations than any other, supports the game at every level from passengers taking clubs for free, to amateur series the Turkish Airlines World Golf Cup and the Turkish Airlines Challenge.