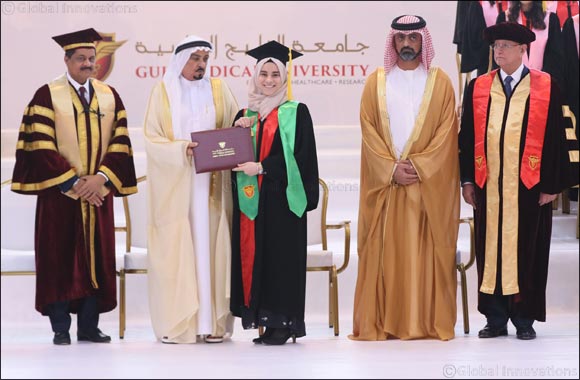 The convocation ceremony was held in the presence of His Highness Sheikh Ammar Bin Humaid Al Nuaimi, Crown Prince of Ajman and Chairman of the Ajman Executive Council and several VIP dignitaries, presided by Dr. Thumbay Moideen – Founder, President Board of Trustees GMU and attended by Prof. Hossam Hamdy – Chancellor of GMU.

Awarding the certificates to the graduates, H.H. Sheikh Humaid Bin Rashid Al Nuaimi Member of the Supreme Council, UAE and Ruler of Ajman congratulated them on their achievement and urged them to continue their specialized studies and excel in their careers, advising them to utilize the knowledge to help the society and the nation. Addressing the Emirati graduates, His Highness said that the country is proud of their achievement.

Addressing the gathering, Dr. Thumbay Moideen, Founder, President Board of Trustees, Gulf Medical University (GMU) said, “GMU is now into its 22nd year of operation and we are now among the most in demand private medical university in the region besides being a well-known brand. Our network of Thumbay Academic Hospitals is one among the biggest network of academic hospitals in the country with the addition of Thumbay Medicity in Al Jurf, Ajman, which comprises the new 350-bed Thumbay University Hospital with the first-ever long-term care facility in the Northern Emirates, the Thumbay Dental Hospital and Thumbay Physical Therapy & Rehabilitation Hospital .We have been unique and trendsetters in the country and have attracted students from 80 countries, faculty and staff from 50 countries and treat patients from over 175 nationalities.”

Dr. Thumbay Moideen thanked H.H. Sheikh Humaid Bin Rashid Al Nuaimi for the government’s continuous support to the institution.  He acknowledged the contributions of the academic team headed by the Chancellor, the faculty, administrative staff and other staff of GMU. Congratulating the graduates, he assured them of GMU’s support always.

The Chancellor of GMU, Prof. Hossam Hamdy said that the number of colleges under GMU has reached 6 and the number of the undergraduate and the postgraduate programs has increased from 15 to 26. He added that GMU established for the first time in a private university an integrated system of healthcare and academia thus improving the level of health services, education and scientific research. He also said that the new clinical facilities in the campus have significantly increased the training facilities for students.

Elaborating on GMU’s global collaborations in academic and research, Prof. Hossam Hamdy added, “The University attaches great importance to international cooperation. During this year, the university signed and activated more than ten international agreements with leading international universities, in the United States, Europe, China, India, Japan, Korea, the Gulf States and the Arab Republic of Egypt, making the active cooperation agreements reach 49 agreements. In the field of scientific research, the University has paid great attention to this and has established international research laboratories that cooperate with a large number of international research centers and work with their counterparts in the UAE, especially in the field of immunology research to treat cancer.”

Prof. Hossam Hamdy advised the graduates to be led by the values of empathy, altruism, conscience, truthfulness, teamwork and fear of God, throughout their careers.