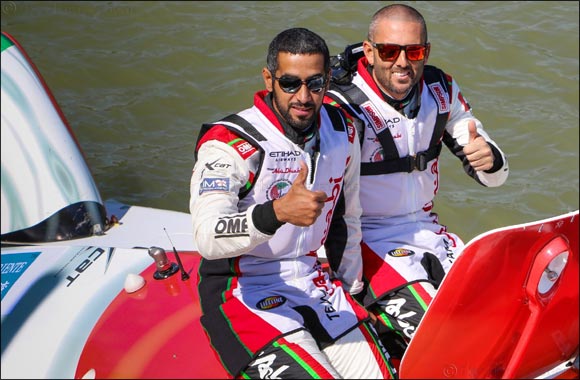 Share Home >> Entertainment
Torrente, Al Mansoori head into final round with focus on double race victory
Abu Dhabi, UAE, 11th December, 2019:   Team Abu Dhabi’s Shaun Torrente and Faleh Al Mansoori will blank out off-race matters in the 2019 UIM XCAT World Championship and focus on securing a double race victory in this weekend’s decisive Dubai Grand Prix.
The defending XCAT world champions, who opened the season with back-to-back race wins in Italy, hope that a repeat performance will be enough to see them retain the title they secured with victory in China’s Hangzhou Grand Prix last year.
“Our focus is purely on getting maximum points from the weekend, and the entire team will have nothing else on their minds,” said team manager Talib Al-Sayed.
After a third place finish in race three at last month’s Shanghai Grand Prix, Torrente and Al Mansoori thought they would arrive at this weekend’s final round of the championship in Duhai holding a five-point lead over the Dubai Police crew of Arif Al Zaffain and Nadir Bin Hendi.
But XCAT Racing later reversed their decision to penalise Al Zaffain and Bin Hendi for hitting a boy, removing a 30-seconds time penalty. They also imposed two 30-seconds time penalties on Torrente and Al Mansoori in Abu Dhabi 4 for buoy infringements at the start.
Team Abu Dhabi have appealed against the penalties, but as no decision has yet been reached, Al Zaffain and Bin Hendi currently lead the championship by six points from Australians Tom Barry-Cotter and Ross Willaton in Maritimo, with Torrente and Al Mansoori another point behind in third.
Rashed Al Tayer and Majed Al Mansoori return to action in Dubai looking to build on an impressive run of performances in China where they claimed a hat-trick of podium finishes in Abu Dhabi 5.
The XCAT boats take to the water at Dubai International Marine Club for two official practice sessions on Thursday starting at 11am and 3.30pm.
The pole position qualifier gets underway at 9am on Friday, with race one roaring to life at 3pm and race two following at the same time on Saturday.
XCAT World Championship positions
1. Dubai Police 143
2. Maritimo  137
3. Abu Dhabi 4  136
4. Abu Dhabi 5  113
5. 222 Offshore  71
6. HPI Racing Team  60
7. The Blue Roo  48
8. New Star Racing  47
9. Swecat Racing  44
7. Kuwait  42