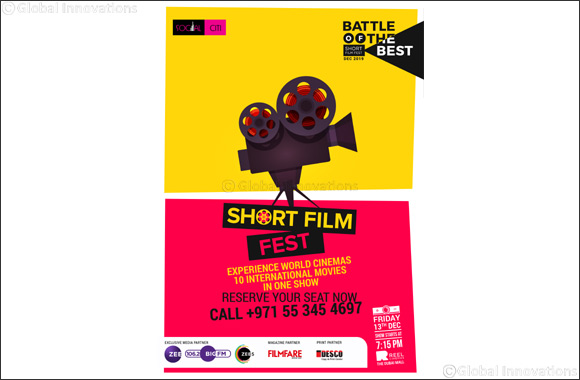 Botb - Short Film Fest is Back on Popular Demand

Battle of the Best – International Short Film Fest, a unique cinematic experience created by Socialciti is back in Dubai on popular demand of filmmakers and UAE cinema lovers. In its 5th season BOTB Short Film Fest presents a unique opportunity to experience world cinema through 10 Short movies in one show.

Supported by the UAE film community and entertainment network like Zee & Filmfare- the Short Film Fest will take place in Reel Cinemas – The Dubai Mall, on Friday 13, December 2019 at 7:00 PM onwards.

With more than 100 entries from International Filmmakers, the best 10 short films were selected, most of them have won awards in other international festivals and are going to be premiered in the UAE for the very first through BOTB Short Film Fest.

Socialciti Founder and BOTB Short Film fest Festival Director, Sadia Noori said that ‘This festival is a rare treat not only for film enthusiasts who likes variety but for all kinds of cinema lovers. Ten movies in one show is like going on ten different journeys around the world in one night. Movie genres range from drama, romance, supernatural, thriller, love, crime, dystopian and silent. The audience will find themselves laughing, crying and reflecting as the movies continue to unfold. As a viewer you will definitely be moved by one of the movies and you will find yourself talking about it for long after the show. That’s the magic of cinema’

This Festival provides a platform for emerging and established filmmakers, to connect with a real audience and bridge the gap between real and reel. Filmmakers from various countries including India, Pakistan, Nepal, Vietnam, Italy, Iran, Kurdistan, Bangladesh, Korea, Canada, United States, Iraq, Oman, Russia, Sri Lanka, Turkey, Egypt, Kuwait, Spain, Chile and the UAE  have send in their entries.

The selected movies will be competing against each other at the festival screening, where a jury panel of nine expert judges from the international film fraternity will select the winners. Best Film, Best Director, Best Actor, Best Actress among other awards will be given to the winners post the screening.

Award winning and celebrated UAE actor, Mr. Mansoor Alfeeli will be one the jury members attending alongside established filmmakers and expert film professionals.