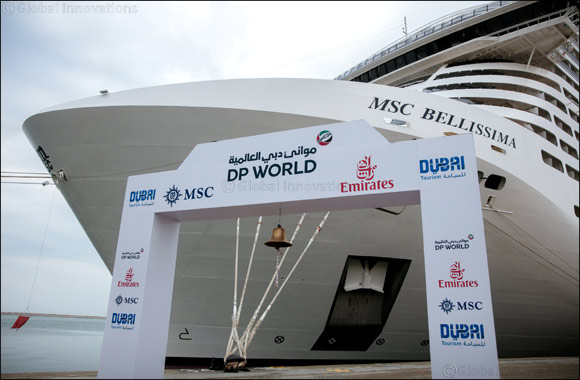 Share Home >> Banking & Investments
• Agreement set to further bolster line’s position as leading passenger cruise operator in the Gulf
• Deal pledges bilateral environmental commitments between cruise line and the port’s operator
• Contract inked onboard MSC Bellissima’s on the occasion of her maiden call ceremony to Mina Rashid
Dubai, United Arab Emirates – 11 December 2019 - MSC Cruises announced that it has signed a long-term agreement with DP World for preferential berthing rights at Mina Rashid in Dubai. Thanks to the additional volumes, the Geneva, Switzerland-based cruise line will further consolidate its position as the largest passenger cruise operator in the Gulf region.
The contract was formally signed today by the line’s CEO Gianni Onorato and Mohammed Abdul Aziz Al Mannaei, CEO - P&O Marinas & Executive Director, Mina Rashid on board MSC Bellissima, the most modern and one of the most environmentally-advanced ships deployed in the region, during her maiden call ceremony at Mina Rashid in Dubai.
Gianni Onorato, CEO of MSC Cruises, said: “This new agreement with DP World is a continuation of what has been a successful partnership and establishes a longer-term framework for our operations out of Dubai that provides our cruise ships with  preferential berthing rights at the Mina Rashid cruise terminal.
“Our existing commitment to Dubai and the region is clearly demonstrated by MSC Bellissima’s presence this season, the most modern, as well as one of most environmentally-advanced, cruise ships to sail in the Gulf. We will strengthen that bond further in winter 2020-21 when we deploy the highly-innovative MSC Seaview, a ship especially designed to operate in warmer weathers, to serve the region.
“I’m also extremely pleased to add that our extended partnership with DP World, a visionary organisation that has the same environmental outlook as we have at MSC Cruises, will see us both work actively together to further reduce the carbon footprint of ship operations.”
Mohammed Abdul Aziz Al Mannaei, CEO - P&O Marinas & Executive Director, Mina Rashid, said: “We warmly welcome MSC Cruises strategic decision to scale up their regional operations with Dubai as their base. It marks a new high in our long and mutually beneficial relationship. We’re particularly happy that a brand new vessel like MSC Bellissima, with its high green credentials, will be homeporting at Mina Rashid and spearheading MSC Cruises’ 2019-2020 winter cruise season. At Mina Rashid, we constantly invest in enhancing  the services and support systems for today’s fleet of ultra-modern cruise vessels.
“The agreement with MSC Cruises for preferential berthing comes at a time when Mina Rashid has been experiencing  double digit increase in tourist traffic. Key to this sterling performance is our flagship Hamdan bin Mohammed Cruise Terminal, the world's single largest covered cruise facility capable of handling 14,000 passengers a day. DP World UAE Region supports the Dubai Tourism Strategy goal of achieving 20 million tourists by 2020. MSC Cruises’ ambitions for the coming year is ideally placed to support this drive.”
Hamad Bin Mejren, Senior Vice President, Dubai Tourism, said: We are delighted to further strengthen our partnership with MSC Cruises and solidify Dubai’s position as the leading cruise hub of the region. Dubai continues to provide its international visitors a superior customer service throughout their travels reflecting the city’s diverse offerings. We are committed towards protecting Dubai’s natural environment and will fully support partner efforts to carry out conservation and sustainabile practices through their business. Our longstanding synergy with our valued partners allow us to cement Dubai’s position as a responsible, year-round-destination of choice.”
The agreement comes on the back of MSC Cruises’ expecting to carry in excess of 180,000 passengers in Dubai this season, a figure that will progressively grow through the lenghth of the new agreement.
MSC Cruises will homeport several ships in Dubai throughout the contract’s term, thus also consolidating its position as the number one choice for cruise lovers from all over the world seeking warm winter sun in the increasingly popular Gulf region.
The new deal also includes commitments from both companies to further reduce the carbon footprint of MSC Cruises’ ships calling in Dubai.  This will include DP World’s implementation of a qualifying fuelling process when MSC Cruises deploys liquified-natural gas (LNG)-powered ships to the Gulf region.
MSC Cruises said last month that it will be the world’s first fully carbon neutral major cruise line in the world from 1 January 2020 with an ambitious programme where all direct carbon dioxide (CO2) emissions from its fleet’s marine operations will be offset through a blend of projects developed according to the highest standards by leading international entities that take immediate action on greenhouse gas emissions.  All costs for the offsets, as well as any other associated items, will be covered directly and in full by MSC Cruises.
MSC Bellissima, which was launched in February of this year, will make 17 calls and spend 35 days in Dubai during the winter season until March 2020 and sail a range of 7-night itineraries in the Gulf.
MSC Cruises will also deploy MSC Lirica in the Gulf for this winter season with 11-night cruises as well as 14-night cruises that call also to India.
The over 600-year old maritime tradition of exchanging crests took place today on board MSC Bellissima in Dubai at a maiden call ceremony between the ship’s Master, Captain Giuseppe Maresca, and senior officials from DP World, Dubai Tourism, Dubai Immigration, Dubai Customs and the Sharaf Shipping Agency, MSC Cruises’ agents in Dubai.

Heads of Ajman Municipality and Ministry of Climate Change and Environment Inspe ...

How Smart Wearables Are Contributing Towards Your Fitness And Well-Being: HUAWE ...

Value of Dubai Chamber Member Exports Up 7.4% in June-August 2020