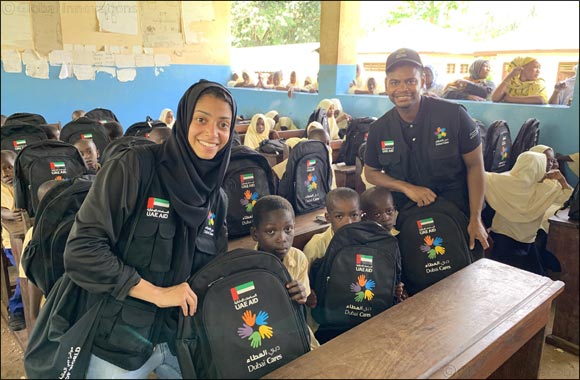 Share Home >> Government, Legal & Humanity
30,000 children in Senegal and 20,000 children in Tanzania receive bags assembled by 2,000 volunteers as part of the “Back to School” edition of Volunteer Emirates during Ramadan
Dubai, United Arab Emirates – 15 December 2019:  50,000 school kits that were assembled by 2,000 volunteers as part of Dubai Cares’ “Back to School” edition of Volunteer Emirates last Ramadan, have reached their final destinations in Kaolack, Senegal and Zanzibar, Tanzania after crossing thousands of miles from their origin in Dubai. Dubai Cares, part of Mohammed bin Rashid Al Maktoum Global Initiatives, distributed the school kits to 30,000 children in around 700 primary schools in the Kaolack region in Senegal, and to 20,000 children in 27 primary schools on the islands of Unguja and Pemba in Zanzibar, Tanzania. The distribution was conducted in partnership with Associates in Research & Education for Development (ARED) in Senegal and Milele Zanzibar Foundation (MZF) in Tanzania.
Commenting on the successful delivery of the school items, Abdulla Ahmed Al Shehhi, Chief Operating Officer at Dubai Cares said: “It has been a real delight to witness the culmination of this wonderful initiative, with the arrival and distribution of the school kits among underserved children in Senegal and Tanzania. For a family that is unable to afford basic school supplies, these kits mean a lot.
They have been received by the children and their families with immense joy and appreciation, especially once they realized that these kits were put together by the wonderful community of the UAE. Tomorrow, as these children embark on their journey to school, they will carry these bags with immense joy. Therefore, I thank every volunteer that joined us this past Ramadan and I invite everyone who hasn’t yet had the opportunity to volunteer with Dubai Cares, to join us in 2020.”
The successful four-day event in Ramadan was attended by H.E. Hessa Bint Essa Buhumaid, UAE Minister of Community Development, H.E. Ibrahima Sory Sylla, Ambassador of Senegal, as well as H.E. Ali Jabir Mwadini, Consul General of Tanzania, demonstrating the vital importance of this community engagement initiative.
According to the most recent UN Human Development Index, Senegal ranks 164 out of 189 countries and Tanzania (of which Zanzibar is a semi-autonomous region) ranks 154. Both countries face continuous economic and educational challenges, especially in their underserved rural areas. In Senegal, 46.7% of the population are living in poverty and nearly half of children aged to attend primary school are kept out of school. In Zanzibar, poverty affects around 30% of the population, and over 340,000 children are still out of school despite government efforts.