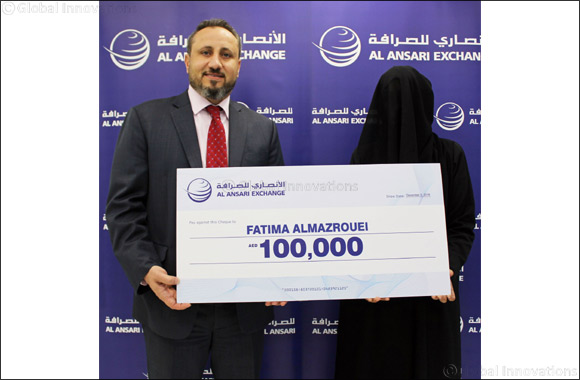 Share Home >> Banking & Investments
UAE, 15 December 2019:   Al Ansari Exchange, the UAE-based foreign exchange and worldwide money transfer company, has revealed that Emirati Fatima Abdullah Al Mazroui has won AED 100,000 one of two grand prizes of Al Ansari Exchange's Mobile App promotional campaign. Fatima, who is the first Emirati woman to bag a major prize for the campaign, used the Al Ansari Exchange mobile app to transfer the amount of AED 600, which qualified her to enter the competition.
Fatima Al Mazrouei, who sponsors 4 needy families and orphans residing by transferring a monthly sum to their bank accounts, never expected that her charity work will turn one day to make her a winner of 100,000 dirhams grand prize. Fatima was using Al Ansari Exchange branches to transfer the money for more than 10 years and she just started using the Al Ansari Exchange app 6 months ago.
Mohammad Bitar, Deputy General Manager, Al Ansari Exchange said: “We congratulate Ms. Fatima Al- Mazroui, the first woman to win the grand prize of our Mobile App campaign. We wish her every success in her generous initiatives. We are honored that we are able to contribute to humanitarian endeavors by facilitating the money transfer for charitable work. Another chance to win AED 100,000 awaits one more lucky customer whose name will be revealed at the end of the campaign. Good luck to all of our customers.”
Commenting on her win, Fatima Al Mazroui said: “I am very happy to receive the AED 100,000- cash prize, my joy was indescribable when it happened. The money will help me further provide the needy families and especially the orphans with educational support and care needed to help improve their living standards. I would like to thank Al Ansari Exchange for the prize and for providing its customers with an easy and flexible smart application. The app has enabled its customers like me to transfer and send money anywhere and anytime.”