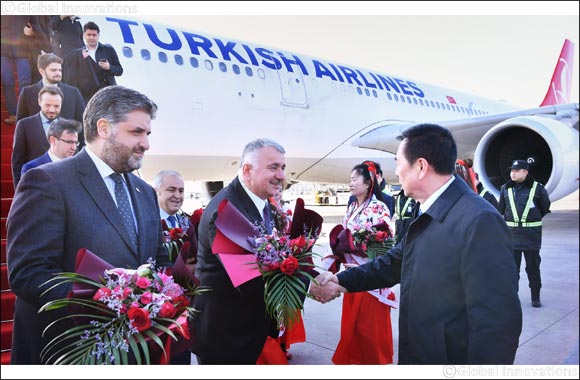 Turkish Airlines added Xi'an, the starting point of the historical Silk Road, to its flight network

Dubai, United Arab Emirates, January 02, 2020:   Offering its guests the opportunity to fly directly to 126 countries from Istanbul, Turkish Airlines added Xi’an, the Chinese city with three thousand years of history, to its flight network on December 30. Xi’an became the flag carrier’s fourth destination in Mainland China and the 318th destination in the world. The flights will be operated three times a week with Airbus A330 aircrafts.

Starting its flights to People's Republic of China back in 1999 with Beijing as its destination, Turkish Airlines reinforced its strong position in Asia with the Xi’an flights. With this new addition, global carrier’s flight network encompassed the entirety of the historical Silk Road that started in Xi’an and ended in Venice.

During the ceremony of the inaugural flight, Turkish Airlines General Manager Bilal Ekşi stated; “We conclude the year by adding a very special city to our flight network after numerous innovations in various areas and the move to our new home that took place during 2019. We will carry our guests to 126 countries from Xi’an, one of the most significant historical capitals while transferring the historical Silk Road to above clouds with our cargo operations. Our new flights will also contribute to the tourist numbers coming to our country with the increasing attention from Chinese tourists to tourism centers of Turkey.”

Turkish Airlines passengers traveling to Xi’an, one of the oldest civilizations of the world, will have the opportunity to explore the numerous cultural heritages along with the historical fabric of the three thousand years old city. Serving as the capital of 13 different dynasties during the history of China, the region’s most popular destination is the Terracotta Army, which draws over two million tourists annually. Hidden underground for nearly 2200 years, it was first discovered during the excavations in 1974. Featuring eight thousand terracotta soldiers, it is considered as the Eighth Wonder of the World.