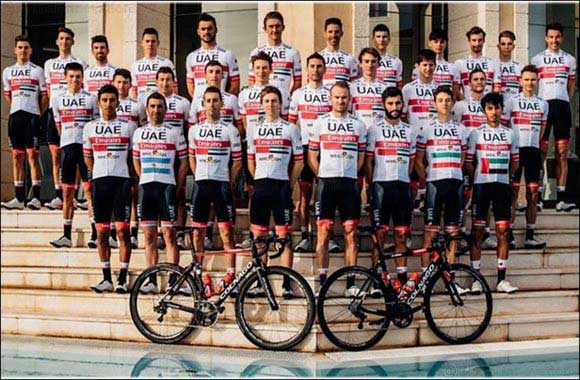 Share Home >> Entertainment
Dubai, United Arab Emirates, January 09, 2020:   The UAE Team Emirates team were joined by eight new riders during the off season as they modelled the new 2020 jersey during their training camp in Spain.
Davide Formolo, Brandon McNulty and Joseph Dombrowski three of the high-profile riders joined a team that already includes Fabio Aru, Alexander Kristoff, Fernando Gaviria and Tadej Pogacar.
Champion Systems again produced the new jersey, keeping the elegance and white clarity of the 2019 design with the exception of a sponsor swap at the bottom of the jersey.
Official launch video and other imagery offer a taste of what the fans will see and support in the upcoming 2020 season: https://we.tl/t-uA0jtI07ac
The first chance to see the team donning the new kit will be the Santos Tour Down Under in Australia kicking the 2020 UCI World Tour season off on 21st January.