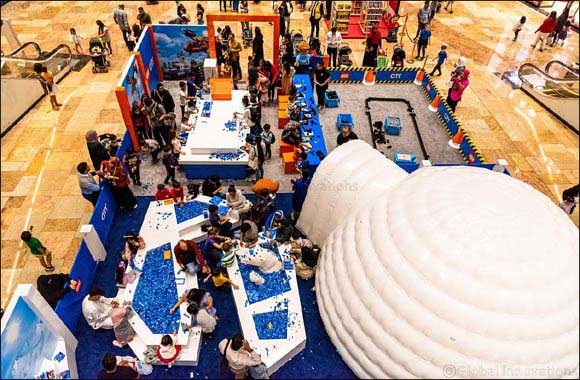 Share Home >> Real Estate & Retail
• 12,500 visitors attended the opening and were the first to watch the all-new LEGO® NINJAGOTM themed IMAGINE show and witness the spectacular fireworks that followed
• Festival visitors can meet their favorite LEGO® characters and enjoy seven diverse LEGO zones offering unique experiences and activities until 14th March 2020
• The outdoor Asian markets will offer delicious street food stalls and pop up stores
Dubai, United Arab Emirates, 09 January 2020:   In collaboration with LEGO® Middle East, Dubai Festival City Mall launched yesterday it’s much anticipated LEGO® Festival in celebration of Dubai Shopping Festival’s 25th anniversary. The LEGO festival, which is the biggest festival to ever be organized by the LEGO Group to date in the Middle East, offered an array of exciting family friendly activities to thousands of LEGO® fans who were keen to be the first to watch the all-new LEGO NINJAGO IMAGINE show.
The festival was officially inaugurated by Steven Cleaver, Director of Malls at Al-Futtaim, Dubai and Urszula Bieganska, Head of Marketing, LEGO Middle East & Africa where a fireworks display lit the sky of Festival Bay to mark the occasion.
Steven Cleaver, Director, Shopping Centers Dubai, Al-Futtaim Malls said: “We are very excited with the turnout tonight and to see this many LEGO fans get together under one roof. At Dubai Festival City Mall we are passionate about creating memorable family moments and watching the children’s excitement as they watch the LEGO IMAGINE show and meet their much loved characters makes us know we’ve hit the mark. Launching this festival in celebration of the 25th Anniversary of Dubai Shopping Festival is the perfect start to the new year.”
Urszula Bieganska, Head of Marketing, LEGO Middle East and Africa, added: “We are delighted to partner with Dubai Festival City Mall to bring this one-of-a-kind experience to the region, and to begin this celebration during the 25th anniversary of Dubai Shopping Festival. With unique themed zones as well as the exciting LEGO NINJAGO show, there truly is something for everyone – and we look forward to welcoming LEGO fans across all ages over the next few weeks to discover what we have in store for them.”
On the launch day, 12,500 visitors got to see first-hand the new LEGO NINJAGO show and its characters battling against the powerful sorceress, Aspheera. The LEGO NINJAGO IMAGINE show took a period of 12 months to develop and over eight months to be produced by the talented Los Angeles based animators of the NINJAGO series at Cartoon Network. The lasers, lights and fire jets of the record-breaking IMAGINE made Kai’s blazing fires, Nya’s water powers, and Lloyd’s green energy come to life through a truly unforgettable experience.
Little ones and their parents also got to enjoy the seven LEGO® zones: LEGO® City, LEGO® Friends, LEGO® Duplo, LEGO NINJAGO, LEGO® Technic, LEGO® Architecture, LEGO® Shadow Runner and LEGO® Jungle. With each of the zones celebrating a popular LEGO® brand, families got to take part in multiple LEGO inspired activities such as building life-sized sculptures, trains, snow men, fire engines and Burj Khalifa. The all mighty NINJAGO characters had also taken over the Festival Bay area where they greeted visitors wandering around the outdoor Asian market that offers delicious street food and pop up stores.
The LEGO® Festival will run at Dubai Festival City until the 14th of March 2020. Shoppers can also take advantage of the Dubai Shopping Festival offers and deals available across popular brands at the mall. Not only is the mall offering up to 50% discount, but shoppers are up for a chance to enter the draw to win a new 2020 Lexus RX Hybrid if they spend more than AED 300.