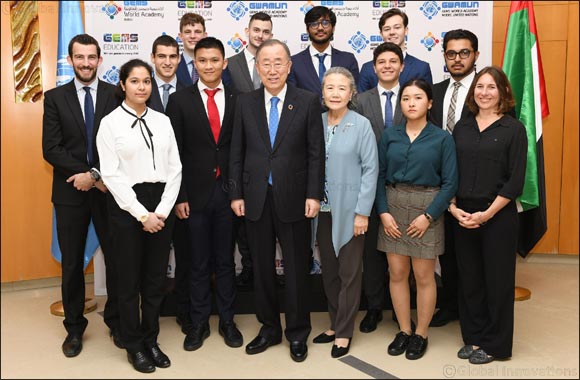 Share Home >> Education & Training
• GEMS World Academy Model United Nations (GWAMUN) hosts first conference in Dubai from January 9 to 11, 2020
• Guest of honour and 8th Secretary-General of the United Nations – His Excellency Ban Ki-moon and ambassador of GWAMUN - addresses the inaugural session and delivers keynote on ‘Global Citizenship’
Dubai, United Arab Emirates, January 11, 2020:    His Excellency Ban Ki-moon, the former Secretary-General of the United Nations and co-chair of the Ban Ki-moon Center for Global Citizens, inaugrated the first GEMS World Academy Model United Nations (GWAMUN) session. The two-day conference was held at GEMS World Academy, Dubai  (GWA) from January 9-11, 2020 and was attended by more than 500 delegates from 34 GEMS Education schools including GWA Singapore and other schools in the UAE. The conference was also attended by government officials, teaching staff and students from around the region. The South Korean statesman was recently appointed as the ambassador of the Model United Nations (MUN) at GEMS World Academy providing students the unprecedented opportunity to gain valuable insights from one of the world’s most admired leaders.
The conference, under the theme of “Challenges of Intervention in a Complex World,”  was organised by the GWAMUN Secretariat – a group of seven students from GWA. Model MUN sessions concentrated on driving dialogue and sharping perceptions as well as gaining a critical understanding of the social, political, economic, and environmental challenges confronting the international community. Delegates discussed key aspects such as the difficulties of intervention in an increasingly complex, connected, and multipolar world - one of the greatest challenges facing the global community.
In his keynote address, Ban Ki-moon said: “We have to be inspired to go out into the world and to work not only for the betterment of our own country but also for the betterment of humankind. It is critical that we all are global citizens first and act with passion and compassion. Today’s youth must be empowered to talk about these issues. I am confident that together, we can make the world safer and more sustainable for today, and for generations to come.
“I am delighted to attend the first conference where I had the privilege of meeting the GEMS World Academy students and thank the Secretariat team led by their Director-General Lihong Wang, and Deputy General Aditya Joshi for organising the Model United Nations Conference. These students are passionate and committed to the MUN concept. They are our future as I look forward to seeing how they will deal with critical topics impacting our world,” he added.
GWAMUN’s ambition is not merely bringing simulation benefits to individual but cultivating an ethic of service, and a character of mindfulness. The conference aims to bring into closer contact the magnitude of the challenges confronting all of humanity and inspire each and everyone to match words with meaningful actions.
Dino Varkey, CEO of GEMS Education, said: “We are delighted to be joined by our guest of honour – the 8th Secretary-General of the United Nations – His Excellency Ban Ki-moon – our Ambassador for the Model United Nations at GEMS World Academy Schools worldwide. It is absolutely a privilege for us, and for the students from around the region who are attending the conference debating on real world issues from climate change to alleviating poverty. With the generous support of Ban Ki-moon, our students have already started receiving an unrivalled learning opportunity to take notes from such an inspirational personality. They can develop a stronger understanding of diplomacy and gain a clearer worldview on current issues, helping them become truly global citizens.”
Since leaving the United Nations, the South Korean diplomat set up the Ban Ki-moon Centre for Global Citizens, an independent, non-profit organisation focuses on decreasing youth mortality, supporting education, women and youth entrepreneurship – and raises awareness for global citizenship issues by implementing the UN’s Sustainable Development Goals. For the next three years GEMS Education will play a key role in supporting the Centre.
GEMS World Academy Dubai, founded in 2008 as a member of the GEMS Education network of schools, has gone from strength to strength and now welcomes more than 1,500 students from 85 countries every day.